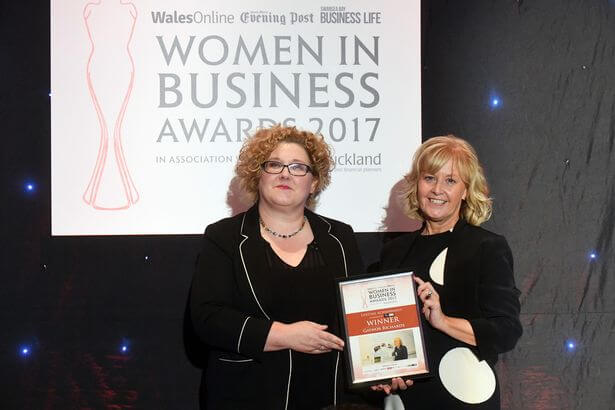 NPTC Group of Colleges’ Chair of the Corporation Board, Gaynor Richards MBE, has been recognised for her lifetime of contribution to the world of business at the south west Wales Women in Business Awards 2017.

Among her achievements, Gaynor was the Wales representative on the UK Childcare Commission. As Chair of the Board of Governors of NPTC Group of Colleges, Gaynor oversees the development of the subsidiary arm of the College which has five trading businesses. She is also a director of an international language school. Gaynor has held/continues to hold many key roles in the region including a board member of the ABMU Local Health Board, where she chairs the Workforce and OD committee. As Children’s Champion at the ABMU, Gaynor has led the first ever Children’s Rights Charter in health in the UK Member of the Welsh Assembly’s Governance Committee.

She served as a European Funding Ambassador for the Welsh Government Member of the Welsh Government Valleys Taskforce whose ambition is to create 10,000 new jobs. Gaynor currently chairs a host of third sector boards and has taken on a number of roles to make a positive impact to the lives of people in this region.

She is currently leading an initiative to develop a Social Enterprise Model for domiciliary care. Gaynor was appointed High Sheriff of West Glamorgan in 2013/14.

Over 200 guests saw Gaynor, who is widely respected for her longevity in business and her commitment to her local community, win the Lifetime Achievement Award at the event which was held at Swansea Marriott Hotel and organised by South Wales Evening Post, Swansea Bay Business Life and WalesOnline.

Also present was former NPTC Group of Colleges A Level student Caryl Thomas, who won the Rising Star of the Year award.

As a previous student, Caryl was able to take advantage of the College’s enterprise and business incubation centre, Centerprise, based at Neath College.  It allowed her to run her business Sparkles from the College, tap into free advice and guidance, giving her the opportunity to grow her thriving cleaning business.

Mark Dacey, Principal and CEO of NPTC Group of Colleges, was delighted with the achievements and said: “Gaynor has been chair of the Corporation Board at the College for a number of years and her commitment is relentless, not just to the College and its students, but her local community, and the NPTCVS.  She has dedicated her life to helping others, and we are so proud to be associated with such an inspirational person.”