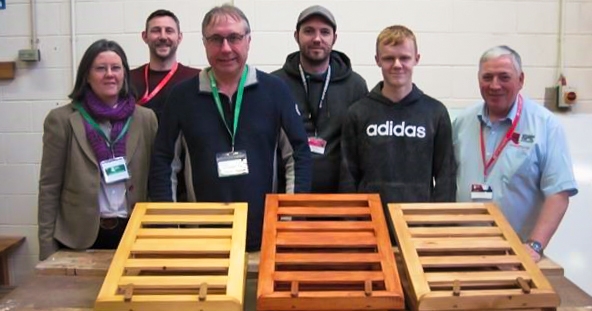 First-year Construction students from Carpentry and Joinery plus Painting and Decorating were delighted to practice their skills by creating several lecterns for local charity Talking Newspapers recently.

Alison Wilding from the Powys branch of the charity approached the College in hope that they would provide a solution for a number of problems their members were facing.

The voluntary organisation provides audio copies of the County Times and The Brecon and Radnor Express for those who are visually impaired or blind but found that creating the audio copies was sometimes difficult due to the size of the newspapers.

She explained that this can make reading them for audio problematic when turning over the sheets. Alison also spoke to Carpentry Lecturer George Stewart about one lady who only had the use of one arm and also found the papers challenging to manage.

Students were then assigned to design a lectern.  Students from carpentry and joinery and painting and decorating were then selected to work on the project.

George explained that the lecterns had been a good project for the students who had used soft woodcuts, shaped and fitted together using various woodworking skills including the Mortise and Tenon joint, the lap wood joint, the dovetail joint and then also fitted with hinges.

He added ‘the students have done very well and enjoyed the job’.

Steve Lunt and Alison Wilding both from Talking Newspapers were presented with the lecterns by students Matthew Smith and Kyle Kirkham, along with David Rimmer, Lecturer from Painting & Decorating and George Stewart, Lecturer from Carpentry and Joinery.

Alison later contacted the college to say ‘They were such a great addition and the ladies were very impressed with your students work, thank you all for the hard work’.