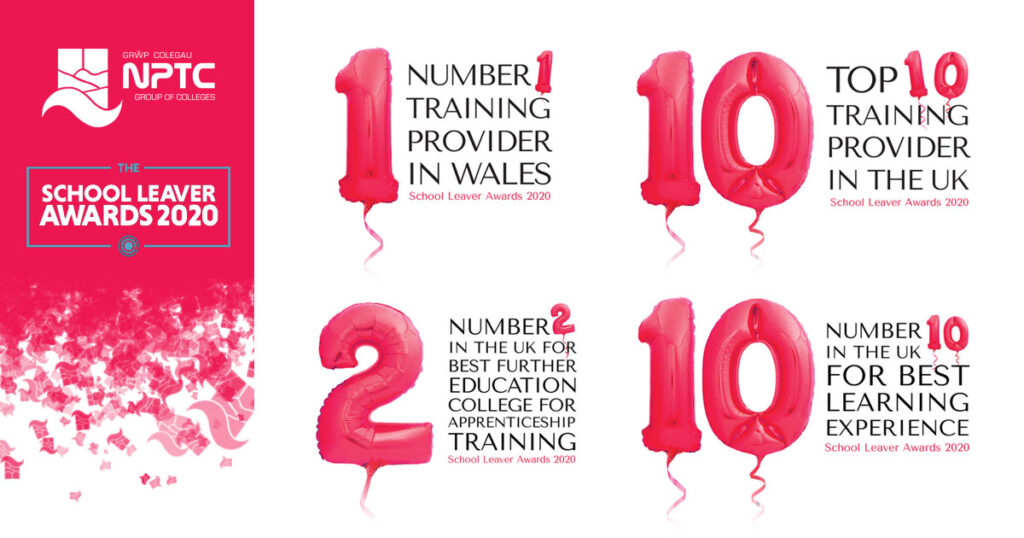 It’s official, NPTC Group of Colleges has been voted yet again as the Best Training Provider in Wales and in the top ten of the entire UK at the recent School Leavers Awards 2020.

The awards took a slightly different approach due to the current pandemic. They were held virtually and introduced by singer, television presenter, narrator and model Rylan Clark-Neal and presented by Paul Harris and Jack Denton, the co-founders of All About School Leavers.

The School Leaver Awards is unique, in that the majority of the winners are nominated due to feedback given directly from apprentices enrolled on their programmes, rather than relying on an independent judging panel.

The awards celebrate the top employers and training providers for school leavers on apprenticeship programmes. It is the largest ranking of employers that offer the best apprenticeship and school leaver opportunities in the UK, and, crucially, helps young people and their influencers make key decisions about their career.

NPTC Group of Colleges was also ranked as the second Best Further Education College for Apprenticeship Training in the UK and tenth in the UK for Best Learning Experience.

Mark Dacey, Principal and CEO of NPTC Group of Colleges was thrilled to hear the news that the College had taken the top spot in Wales for the second year in a row. He said:

“To be named as the top training provider in Wales and one of the best in the UK for the second year in a row is impressive stuff, but when it’s something that our students have voted for independently, that makes it even more special. We’ve had no input and haven’t actively applied for this, so this is really great news for us and testimony to the hard work and dedication of the staff at NPTC Group of Colleges.”

Jack Denton, director and co-founder of All About School Leavers.co.uk, said:

The Top 150 Employers and Top 100 Training Providers are based entirely on the opinions of apprentices and school leaver trainees from 100 UK organisations.

Apprentices completed surveys analysing everything about their employers and training programmes, from skills development and career progression to training and company culture.