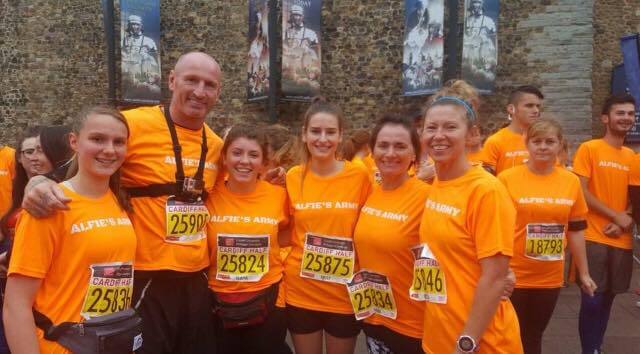 A team of students from NPTC Group of Colleges’ Childcare course, supported by staff, took part in the Cardiff half marathon. The group participated in the event as part of the 100 runners making up ‘Alfie’s Army’.  Four months ago, the Wales rugby legend Gareth ‘Alfie’ Thomas set out to help the young people across Wales kickstart a healthier lifestyle by going from the sofa to half marathon runners in just four months.

Physical Activities Officer Helen Owen and Business Lecturer Amanda Disley supported childcare students Eloisa Isaac, Christie Mantle Jones and Emily Venti in the build-up to the event and on the day. Helen Owen said: ‘The girls trained hard alongside juggling coursework, part-time employment and dealt well with the pressure of my constant pestering to maintain our training regime.’

The BBC filmed two groups of Alfie’s Army runners preparing for the race and also covered the run on the day which was aired on the BBC on Monday evening.

The group from Newtown College managed to run the 21k course in an amazing 3 hours.  They also got to meet the legend Gareth Thomas himself, and couldn’t praise the Alfie’s Army team enough for their hospitality, support and encouragement.

The girls all said that the experience had been fantastic and along with achieving a fabulous result, they had enjoyed the team spirit.