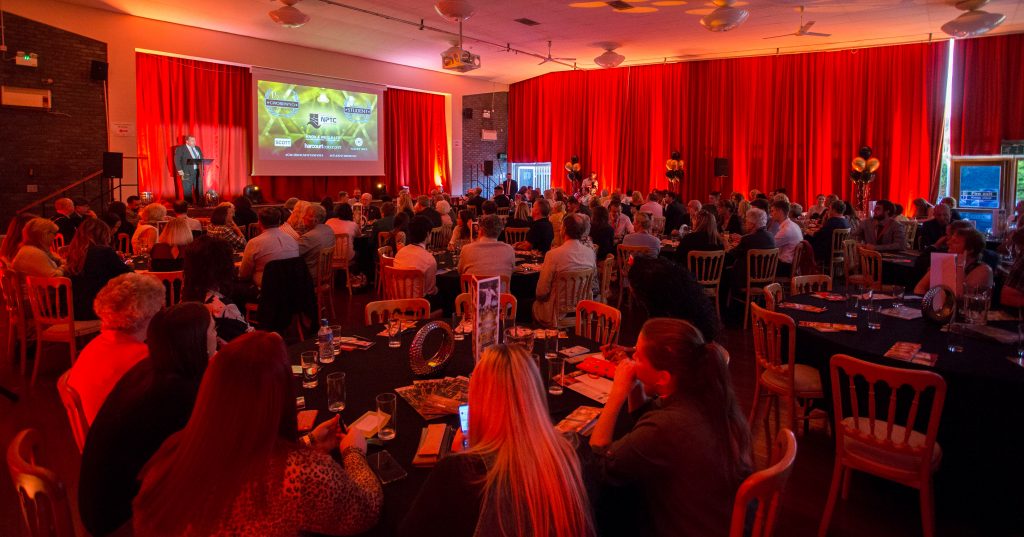 Some of the brightest and most promising students in Wales have been recognised at NPTC Group of Colleges’ annual Student Awards ceremony held at Neath College recently.

The evening was a celebration of academic and personal success, with one student from each academic area crowned School Award Winner. The ceremony also recognised the contribution made by staff through the presentation of a Corporation Board Award and the Tutor of the Year.

This year, a charity raffle was held for Macmillan Cancer Support, as a member of College Staff, Gail Dubec was Braving the Shave for the charity, with celebrity hairdresser Lee Stafford on hand to shave Gail’s hair.  Past student, previous award winner and current Osprey Tiann Thomas Wheeler chose the winners.

The proceedings were rounded off with an award for the overall student of the year, chosen by Mark Dacey, Principal and Chief Executive of NPTC Group of Colleges.

The overall winner for this year was Agricultural student Fflur Roberts.  This incredible lady took every opportunity both within and outside college to further herself in her chosen career path in Agriculture.

In recognition of her achievements in College and work in the community, Fflur was runner-up in the Land-based Learner of the Year Award at the Royal Welsh Winter Fair in December 2018, she then went onto win the prestigious Royal Welsh Agricultural Society Student Award.  She is a member Llanfair Caereinon Young Farmers Club where she has entered various competitions at the Field Day, Stock Judging, Eisteddfod and the YFC Prime Lamb competition at the Winter Fair over the last 4 years.

A fantastic role model to other agricultural students she tirelessly works to promote the industry to young people through work with the YFC Youth Forum, Dunbia Young Farmers Producers, Meinir Howells, S4C, and Farming Connect.

And when she isn’t busy on her family’s farm she voluntarily helps out an elderly local farmer during lambing season!!

The ceremony was compèred by actor and presenter, Kev Johns, who introduced the nominees and awarded the winners’ trophies, who also was humbled by her achievements – but who also worried about the cows after the whole family made the journey from Newtown to Neath.

It was a fantastic night all round with Sian Humphries, Head of Upper School Cefn Season, collecting an award on behalf on one of her previous students Kayleigh Mellor, who was the outstanding student of the year for the School of Building Engineering Services saying:

‘’I’m so proud of Kayleigh and her achievements in College, and delighted that she has been recognised for her work and we are extremely proud of the partnership the College has with Cefn Season.’’

Mark Dacey, Principal and Chief Executive of NPTC Group of Colleges, said the award ceremony was a great success: “It’s a privilege to be able to congratulate all the students on the hard work and dedication they have demonstrated. The Student Awards is a celebration of the effort these remarkable students have put into their studies. I want to thank everyone involved for making this event such a success, with a special mention to the evening’s sponsors. On behalf of all staff at NPTC Group of Colleges and the Board of Governors, I send my heartfelt congratulations to the all the award winners.”

Sponsored by Harcourt Colour Print, the College’s longstanding print collaborator and Knox & Wells, the main contractor responsible for the development of the new A/B Block refurbishment which housed the pre-show drinks and canapés and local business Valley Mill.

Michael Tucker: Apprentice of the Year

Hazel Roberts: Tutor of the Year

A full gallery of the evening can be found on our Facebook page.