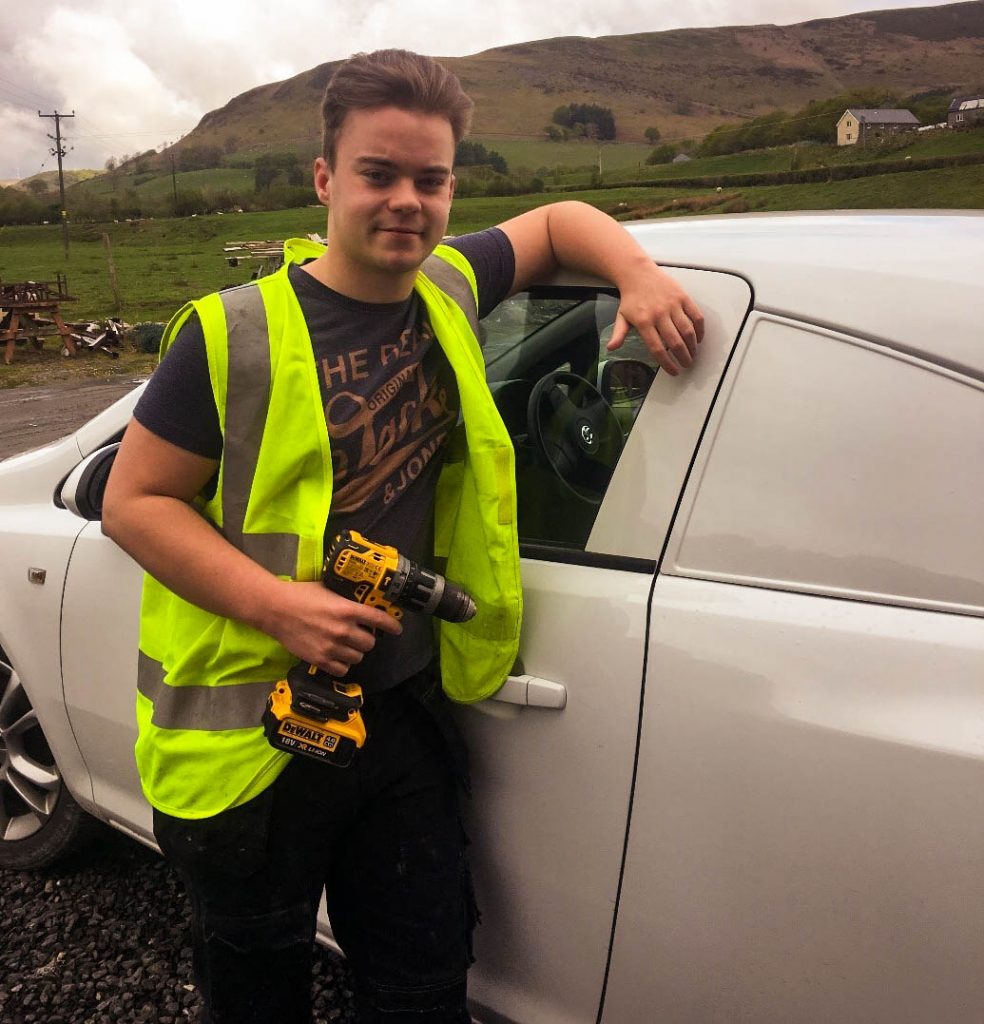 An apprentice carpenter who studied at Newtown College is delighted after securing a job following successfully passing his qualifications.

Dominic Evans, who is 19 years old, studied Level 2 Carpentry as part of the apprenticeship scheme with the College and F1 Modular, an offsite construction company based in Newtown. As part of his studies, Dominic learnt how to hang doors and fit locks and through his work placement, he could expand his knowledge and put some of his skills into practice.

Dominic spoke of his time at the College, mentioning the fantastic levels of support he gained from his lecturers and the apprenticeship team. Recommending the course to others Dominic said: “ The course is excellent in providing support. My lecturer George Stewart helped me through the course, teaching me new ways to do things and giving me lots of motivation. Tom Naylor my NVQ assessor has been a great help too, supporting me to finish my NVQ hastily because of the current situation with COVID-19, along with Theresa Mullinder at Pathways (the department at Newtown College which runs apprenticeships) who has supported me throughout the course.”

Dominic found himself benefiting from the efficient support of the Pathways apprenticeship team after struggling to complete his qualification due to the lockdown. He was made redundant and the team were able to guide Dominic to identify alternative evidence which was required to fulfil the course.

Tom Naylor has been Dominic’s NVQ assessor since October 2019, describing him as a motivated student who, from the word go, was keen to engage in his work and provided good evidence throughout, responding well to the assignments.

Tom said: “During my visits, I was impressed with his mature attitude to learning skills and his competence in doing the tasks. He also had an excellent relationship with his trainers and peers. It has been a pleasure to be his assessor this year and I wish him every success for the future.”

As a result of his hard-working attitude, Dominic was the first NVQ Level 2 student to complete the course requirements and pass this year in Powys.

He also received praise in his approach from Training Advisor Theresa Mullinder who said: “I’ve been working with Dominic since August 2019. I have always found him to be a hardworking, enthusiastic and very pleasant young man. We have stayed in touch during lockdown and we were delighted that he did not let this period of uncertainty hold him back. He applied for a new job with Tai Dyfi Homes who build bespoke timber frame homes and I wish Dominic every success in his future.”

Dominic is now looking forward to starting a new job and is optimistic about the future. The College looks forward to welcoming back  Dominic should he decide to continue with his training and progressing to a Level 3 Carpentry Apprenticeship in September.