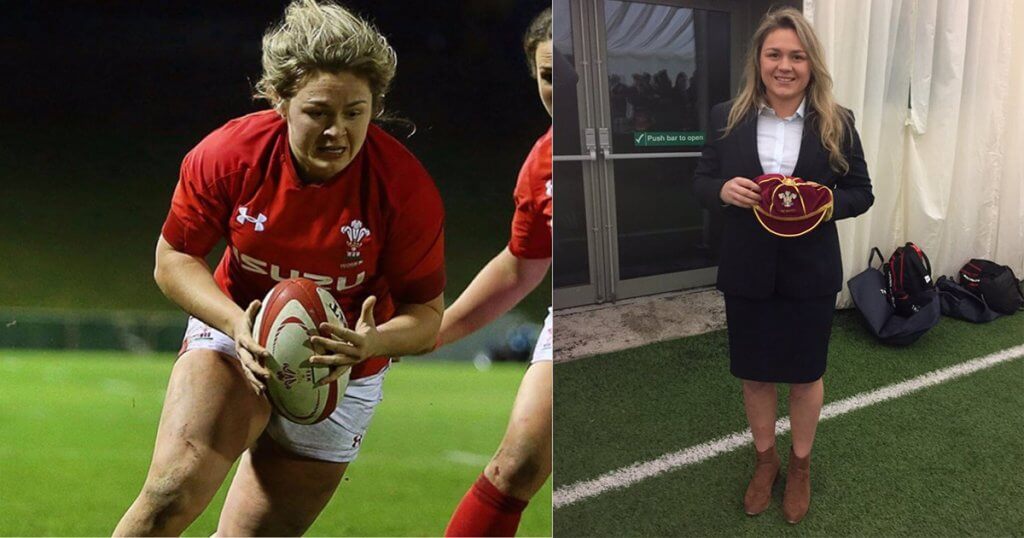 When a serious injury ended her international football career, former Llandarcy Academy student Hannah Bluck decided to ‘have a go’ at rugby.

Almost a year later, the 20-year-old has been chosen to be part of this year’s Women’s Six Nations squad and scored a try on her debut against Scotland last weekend.

Hannah, who studied Sport Development, Coaching and Fitness has had a whirlwind few years. The multi-talented athlete represented Wales in basketball when she was in school and was then capped for Wales in football at three age levels – under16s, under17s and under19s.

However, the promising career took a major knock when Hannah broke her leg just above the ankle.

“I was just training and went to turn quickly, and it just snapped,” she explained. “It was obviously a huge shock, and I had to just get used to not training.”

There was also a double shock for Hannah, who also discovered she had the rare condition avascular necrosis in her tibia, which could have seen her leg collapse into her ankle.

“I thought I could have lost my foot after the fracture, and definitely may not have been able to continue playing,” Hannah explained.

“But I had MRI scans on the foot to keep an eye on it, did my rehab, and was able to get back to playing.”

After returning to playing football, Hannah was asked to help out with training the Women’s Rugby Team at the University of South Wales, where she is studying for a degree in Strength and Conditioning, and it’s from there that she started to consider playing a different sport.

“When I was doing the coaching, I had a go at goal kicking and I thought I’d give rugby a go,” she said.

“I was selected to play for the Cardiff Blues, and the next thing I was asked to try out for the Wales squad.

“I couldn’t be happier to have been given the chance to represent Wales. I’m really keen to be a role model, and show others that it’s possible to achieve anything if you work hard enough.”

Interviewed after her debut in the victory against Scotland, Hannah said: “It was amazing to gain my first cap and to score a try.”

The team are now preparing for the match against England at The Stoop on Saturday. We wish her all the best for the rest of the tournament and her burgeoning rugby career.

Feeling inspired by Hannah’s story? Click HERE to find out more about our range of full-time and part-time Sports courses.