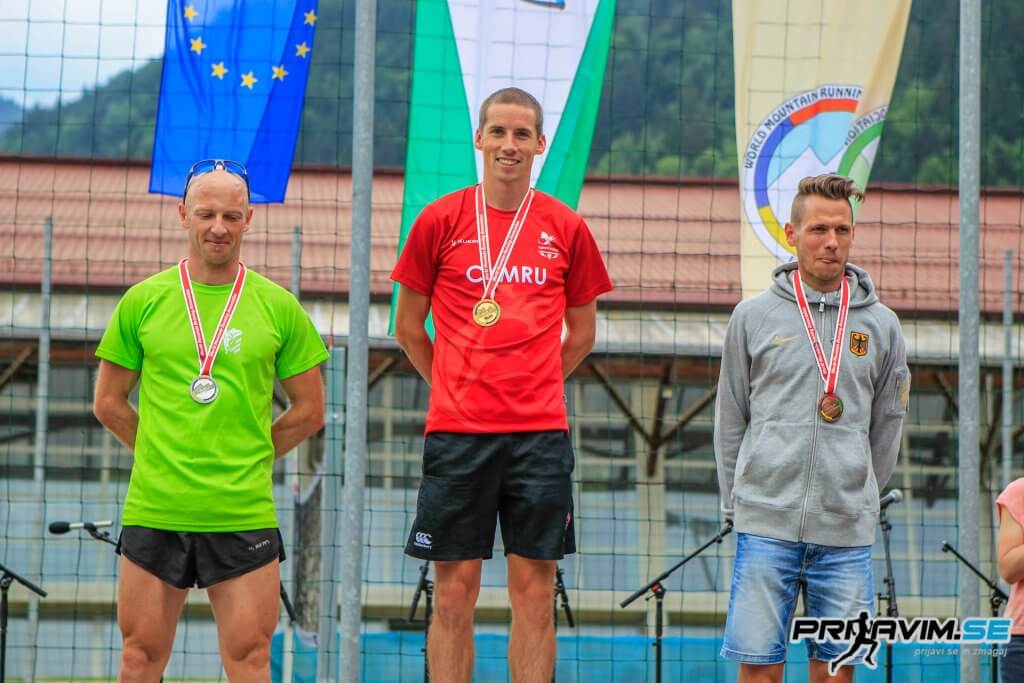 From Australia to Slovenia: fresh from his efforts at the Commonwealth Games in Australia, NPTC Group of College’s Andy Davies has claimed victory at the World Masters Mountain Running Championships in Slovenia.

The 38-year-old marathon runner finished an impressive 11th place in the sweltering heat on the Gold Coast, before claiming individual gold in the Master 35 category on June 2nd.

The weather conditions weren’t as severe this time around, although the race itself was just as gruelling.

Taking place on the Ratitovec Mountain in Zelezniki, the race saw nearly 400 runners over 35 run 10.8km with the unenviable task of a 1,184m climb.

That didn’t prevent Andy from continuing a fine year, though, as he earned a winning time of 1:04:44.

The victory will be right up there as one of the high points in the career of the Newtown College lecturer, who has now represented his country at two Commonwealth Games and the World Championships after becoming the first Welshman to run the marathon for 16 years at the 2014 Glasgow Games.

A lot can happen in four years, as Andy was up against stiff competition to get to the games this time around.

It only served as more motivation to succeed, as not only did he qualify, he was the first Welshman to cross the finish line.

Looking back on his exploits at the Gold Coast, he said: “Once I heard that Australia was the next Commonwealth Games, I had to get on that plane!

“It was a bit more intense, this one, to try and get there.

“We had quite a big squad actually, and seeing as they raised the standard higher for the Welsh team I wasn’t expecting that many.

“People upped their game, especially in the endurance event and it was a good team atmosphere as well. We had four marathon runners this time, so that was good.

“Obviously we all wanted each other to do well but there’s always that (feeling), you’d like to get one up on the other person!

“But it was good to have other people in the race and it was quite nice to be the first Welshman back.”

Andy finished just short of the top 10 whilst dealing with temperatures that would reach 29 degrees during the race. The result left him torn between wondering what could have been, whilst feeling lucky to finish at all.

“I’ve done one or two other hot races, but that was… a bit beyond! It was tough,” he said when reflecting on the race.

“I know we already had the temperatures out there before (when training). We were supposed to acclimatise after a week to 10 days but it would have taken a lot longer to acclimatise to that heat.

“We had a bit of a heat-wave while we were there, so the temperatures were higher than they expected.

“But it’s the same for everyone else, so it’s just a case of getting on with it.

“I had to be happy with the position in the end, I couldn’t have done any more and was just happy to get around.

“Looking at the field of 24 that started, maybe a third of them dropped out, it kind of shows just how hard it was.

“Some of the states that some people finished in… Just to get around was pretty pleasing.”

His efforts didn’t go unnoticed, with messages of support flooding in from back home in Mid Wales. It was something Andy didn’t expect, as he still gets stopped in the street to this day.

“It was pretty incredible, the amount of messages on different posts and everything, there were messages coming in left, right and centre!

“Even since I’ve come back, people have said: ‘Well done, I stayed up to watch it’, just strangers in the street.

“It has been quite incredible that people actually stayed up till one o’ clock in the morning to watch it.

There were a few familiar faces to greet Andy in Australia, with Welsh Bowls Team Manager Hazel Wilson and Seven’s star Tom Williams among them.

After going from being a spectator at the Melbourne Games in 2006 to being one of the stars he would have watched 12 years on, Andy hopes he and his fellow Mid Wales contingent can inspire others to succeed.

“I met quite a few others, other people from Radnor,” he said. “A few locals around there!

“It is a good influence to know that people from around here have made it, and shows to other people that it doesn’t matter if you’re from Cardiff or Swansea, you can if you’re from Newtown. It doesn’t really matter.

“As long as you put the effort and time in you can get there.”

Fast approaching the end of his thirties, Andy has no plans to slow down any time soon.

“Obviously I would love to go to the next Commonwealth Games (Birmingham),” he said. “We’re going to have to see where I am by then. Hopefully I won’t have slowed down too much.

“This year I have had a word with the coach and I’m going to do a lot more mountains. Then we can start another marathon build up and hopefully do the New York Marathon in November.

“It will be the same as Glasgow, I’m used to the windy and wet conditions so it might play into our favour a bit!

“We still think it’s possible to do a 2:14 marathon, so I’m still going to be doing one or two marathons every year to try and get that.

“I’m five seconds under at the moment. Hopefully I can improve and get that one.”