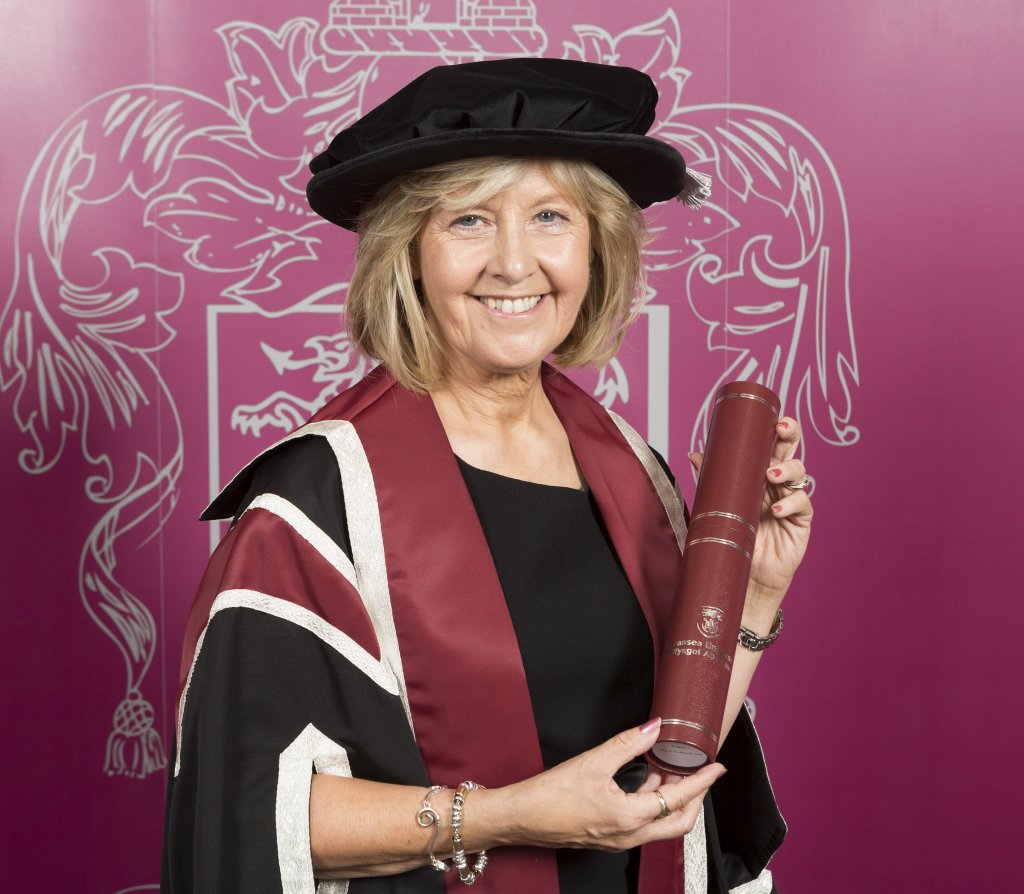 NPTC Group of Colleges Chair of Governors, Gaynor Richards MBE, has been awarded an Honorary Doctorate (LLD) from Swansea University.

The Honorary Award is one of higher education’s most significant accolades and is presented to individuals in recognition of outstanding achievement to the University or the region. The honour was bestowed on Gaynor for the contribution, value and difference that she has made in the community and recognised through her appointment by the Queen as High Sheriff of West Glamorgan in 2013/14, following on from being awarded an MBE for services to the voluntary/community sector in 2008.

Since 2011, Gaynor has been the Chair of Board of Governors at NPTC Group of Colleges. Her role involves overseeing several subsidiary social enterprise companies (Social Enterprise) whose profits are re-invested back into the organisation providing Further and Higher Education to the local population.

Gaynor is also Director of Neath Port Talbot Council for Voluntary Services (NPTCVS), a post she has held since 1997. During her stewardship the CVS has grown from a small organisation with an annual income of just £105k to one of scale that has supported other local voluntary organisations to secure well in excess of £50m in grants. CVS is now an organisation that is central to the life of the community. During this time, she has developed and guided the organisation into one of the lead Councils for Voluntary Services in Wales.

Gaynor’s ability to influence change in areas such as early years, education, health, community resilience, economy and employability has already been recognised by the wider sector and by Government – local, national and at a UK level, exemplified by the number of forums, panels, and reviews she has been invited to participate in.

These include acting as an adviser to Welsh Government on the new Childcare Strategy; representing Wales on the UK Childcare Commission chaired by the Rt Hon Harriet Harman; and Chairing the Welsh out of School Childcare organisation – Clybiau Plant Cymru.

Gaynor’s set up one of the first Independent Childcare Social Enterprise in Wales, developing a model where the public and private sector couldn’t or wouldn’t set up a locally needed service.  Tiddlywinks has been operating as a Sustainable Business in the Swansea Valley for 21 years.  It was named in the Wales Childcare Strategy Consultation as a model of good practice and continues to employ 26 staff.

There are many other examples including her appointment in 2009 as the inaugural Third Sector Non Officer Member to ABMU Health Board, which she held for the maximum eight year term. As a Member of the Board she was appointed as their Children and Young Peoples Champion, Welsh Language Champion and chaired the Workforce and Organisation and Development. Committee.

Gaynor has also found time to participate effectively on the Public Services Board, the Ministerial Task Force for the Valleys, the Independent Review of the Welsh Assembly Third Sector Scheme, the Welsh Government Governance Committee, Welsh Government Social Enterprise Working Group for Wales; to Chair the new Third Sector Infrastructure Network Wales on Influencing and Engagement, and in 2015 Chaired the Sudden Unexpected Death in Infancy – A Collaborative. Thematic Review. In 2014 she was appointed as one of three E.U. Funding Ambassadors working to the Finance Minister at Welsh Government – to help promote and maximise opportunities presented by the directly managed EU programme for Wales, and has served as a Board Member of BIG Lottery Wales Committee.

Gaynor has also recently accepted an appointment to the Council of Swansea University.

On receiving her award she said: “I am extremely honoured and humbled to receive this award from one of Wales’s foremost institutions.  I am proud to be connected with Swansea University, a university of such inspirational ambition which I have watched grow in scale and standing in recent years.  I look forward to continuing close contact with the university in future.”

CEO and Principal of NPTC Group of Colleges Mark Dacey commented: “The College is immensely proud of Gaynor’s achievements and the Honorary Doctorate is recognition of her dedication and commitment in helping to improve lives in the community and is justly deserved.”