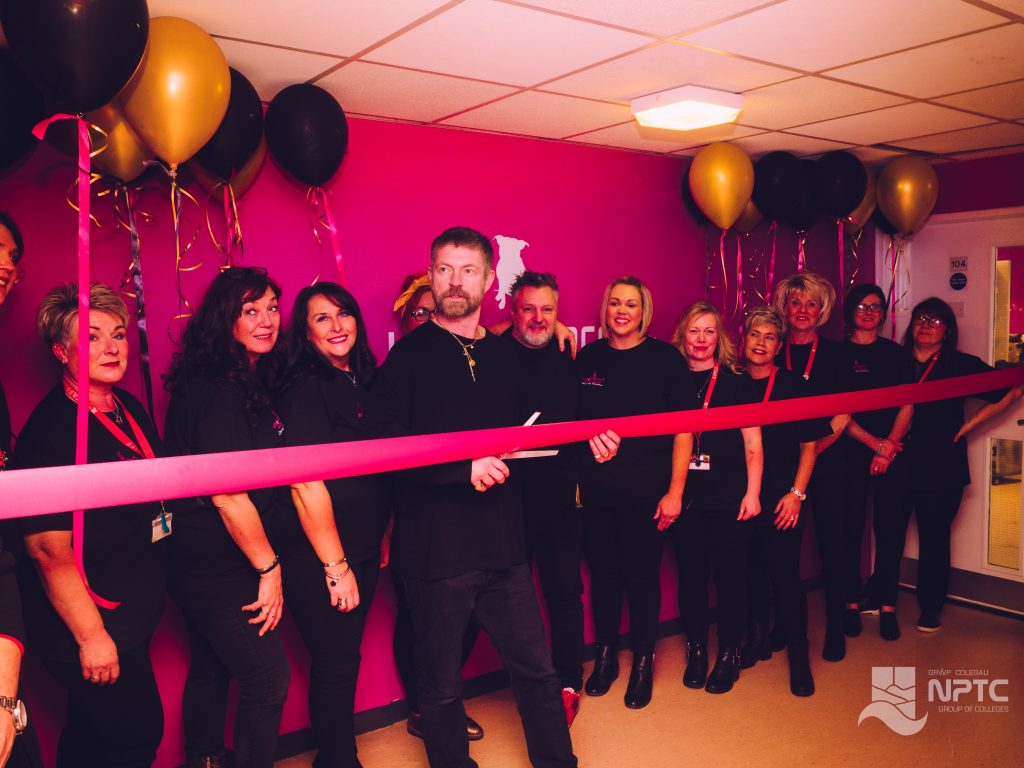 Award-winning training in hair and barbering is officially at Brecon Beacons College.

Celebrity hairdresser Lee Stafford has officially opened his first Academy in Wales at Brecon Beacons College, as part of NPTC Group of Colleges.

His highly experienced staff have been intensively working with the Hairdressing team at the College as they deliver their first class Michelin Star standard training the Lee Stafford ‘recipe’ way, ready for the September in-take. Lee was also on hand to give some helpful tips and to officially open the new refurbished salon.

Pupils from across Powys have already received a masterclass from the celebrity hairdresser, who took time out of his busy schedule to demonstrate his recipe for a ‘Twisted Tong’ at the recent Careers Wales Positive Pathways event at the Royal Welsh Showground.

Now the College has been totally revamped and the enthusiastic team will now be looking to launch the new academy to the local community and employers in the Autumn. This will take place on both the Brecon and Newtown sites, following Neath Colleges’ launch on 7th May.

Lee Stafford won The British Men’s Hairdresser of the Year award in 2001, was a resident celebrity hairdresser on This Morning, has successfully launched his own product range and has cemented his place as one of the UK’s most admired hairdressers. However, despite his success, Lee has never forgotten his roots, and is still very thankful for those formative dining room years.

“I am so pleased to officially launch the first Lee Stafford Academy of Hairdressing, Barbering and Applied Therapies in Wales in partnership with NPTC Group of Colleges,” he said.  Brecon Beacons College is the first of the three locations to be officially opened for the College, and I look forward to officially opening our other academies soon.”

He added: “It’s great to be able to give something back to students. I’m very passionate about giving young professionals the best opportunity for a good education within hairdressing. I really look forward to working with NPTC Group of Colleges where we will be working with the students to develop really strong techniques and great attitudes in preparation for their careers in the hairdressing industry.”