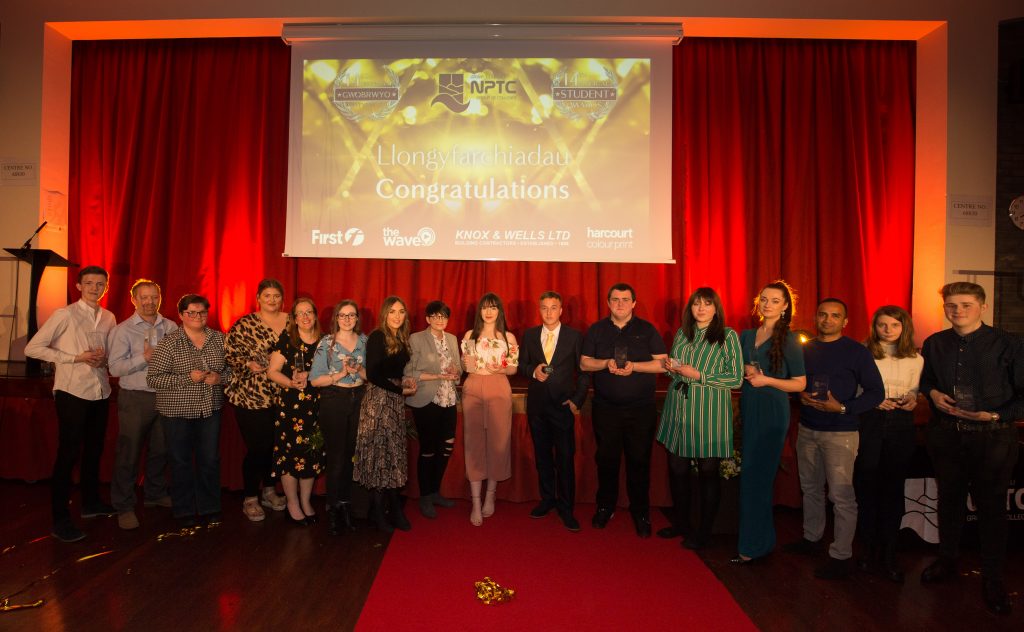 Some of the brightest and most promising students in Wales have been recognised at NPTC Group of Colleges’ annual Student Awards ceremony held at Neath College compared by well-loved local actor and presenter, Kev Johns.

The evening was a celebration of academic and personal success, with one student from each academic area crowned School Award Winner of the year, plus some special awards such as Apprentice of the year, Adult Learner of the Year and Higher Education Student of the Year. The ceremony also recognised the contribution made by staff through the presentation of a Corporation Board Award and Tutor of the Year.

These are the students that have shone above the rest and given their all to achieve their goals and aspirations.

These are the students who have put in the effort to achieve fantastic qualifications whether it be A* (stars) or A’s in their A Levels or triple distinctions stars in their vocational studies, or those who have overcome obstacles and barriers that would make many just give up. The College also took the time to celebrate the achievements of students who compete in Skills competitions, and recognised the contribution made by both College staff and students to get to finals, especially the world skills UK Finals in Birmingham.

This year, a new award was made to a student who has triumphed over adversity; a student whose drive to create a brighter future was evident and who has succeeded against all the odds through sheer hard work and determination. The John Brunt Award has been introduced in memory of College Governor, John Harold Brunt OBE, not only for his invaluable contribution to the strategic running of this College but for his warmth, candour and dedication to the betterment of the communities he served.

The inaugural recipient of this award was Computing & IT Student, Zilvinas Milvyvas from Brecon Beacons College.  When he started with the College, he spoke no English. Through sheer hard work and determination, he progressed from a level one business course to a level three IT course – after discovering a passion for web development. He has since flourished and now looking forward to studying web development at University

The proceedings were rounded off with an award for the overall student of the year, chosen by Mark Dacey, Principal and Chief Executive of NPTC Group of Colleges which this year went to Eve Vincent.

Eve Vincent was accepted to Clare College, Cambridge after picking up an A* grade in French and A grades in English and History in her A Levels. This incredible young lady now studies French and Russian at the top University after teaching herself Russian from the age of 15! Once Eve decided that she wanted to study Russian at University, she enlisted the help of Nina, a Russian student who was studying English language at Neath College. Eve and Nina met twice weekly in Neath Library where Eve was also able to help Nina improve her English and the two became firm friends. Nina followed her through every step of the application process and now, after a year at Cambridge, Eve dreams of a career in interpretation.

Speaking during the ceremony, in Russian too, Eve said she would always remember her time at Neath College with fondness.

Mark Dacey, Principal and Chief Executive of NPTC Group of Colleges, said he was privileged to congratulate the students on their achievements.

“The Student Awards are one of the main highlights of the year and it’s such a privilege to be able to congratulate everyone concerned. The evening allows us to recognise those students who have gone above and beyond in their studies. It gives us the opportunity to celebrate their success and also the dedication of staff who support them on their journey. It’s a big thankyou to everyone involved for making this event such a success, and a special mention to our sponsors.

“On behalf of all staff at NPTC Group of Colleges and the Board of Governors, I send my heartfelt congratulations to the all the award winners.”

Sponsored by The Wave, Harcourt Colour Print, the College’s longstanding print collaborator, travel partner First Cymru, and Knox and Wells, the main contractor responsible for the development of the new A/B Block refurbishment which housed the pre-show drinks and canapés.