Apprenticeships are not just for school leavers, in Wales they are available to anyone over the age of 16 and, as an adult returning into education, you’ll want to know that the teaching you will receive is of the highest quality. With that in mind, NPTC Group of Colleges was named the Best Training Provider in Wales at the 2020 School Leavers Awards for the second year in a row.

The awards celebrate the top employers and training providers for school leavers on apprenticeship programmes throughout the UK. It is the largest ranking of employers that offer the best apprenticeship and school leaver opportunities, and, crucially, helps young people make key decisions about their career.

So, if you want to change careers and studying full time is not an option for you, then an apprenticeship with NPTC Group of Colleges could be exactly what you are looking for!

An apprenticeship or work-based learning gives you the chance to gain valuable experience in a real job and get nationally recognised qualifications, all whilst earning a wage!

You can find a career in lots of areas including:

We also work with employers to upskill staff wanting to step up in their careers, with various qualifications in areas such as Leadership & Management, AAT (Accountancy), Team Leading and Business Administration.

We have even been awarded funding under the new Degree Apprenticeship Programme for Wales, to develop programmes to upskill existing employees to degree level in areas such as; software engineering, cybersecurity and data science. 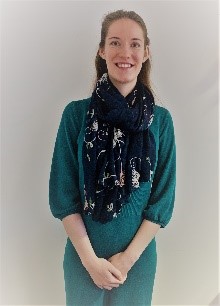 Finance Apprentice Leanne Heymans was able to gain employment within Swansea Bay University Health Board as their very first Finance Apprentice. This involved working in Baglan HQ’s Devolved Financial Management Team for four days a week and then attending College to study towards the Association of Accounting Technicians (AAT) Level 2 Qualification on the fifth day.

Last year, Leanne was promoted to Senior Finance Officer within the same team. Much of her apprenticeship tasks were carried forward into her new role, however, she shortly gained additional responsibilities of higher complexity, and was expected to be almost entirely self-reliant.

Leanne said: “My workplace was very supportive of my education and would actively look for opportunities to help me grow. As time went, on my responsibilities and duties increased, and I found a great deal of satisfaction in becoming more self-sufficient. Likewise, my educational support has continued, and I am currently studying towards the AAT Level 3 Qualification. My apprenticeship has been the primary catalyst in providing me with the promise of a good career and I am immensely grateful to have been on this journey.” 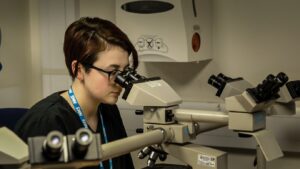 Amber, from Llanelli, began her career in the healthcare sector on the Level 3 Apprenticeship in Pathology Support with Swansea Bay University Health Board at Singleton Hospital, Swansea and Pathways Training after deciding there was more to life than working in a local DIY store.

A typical day for Amber can see her prepare samples and work alongside biomedical scientists to label specimens on the dissection bench. It was this hands-on working approach and a new-found enthusiasm for the sector that made juggling other demanding commitments outside of work worth it to ensure she continued doing what she enjoyed so much, which was demanding at times.

Amber was one of the first learners in Wales to complete the Pathology Support qualification and is now classed as a healthcare scientist in her own right, securing a permanent position within SBUHB and then a promotion.  She is an advocate for apprenticeships within the health board and also mentors the new apprentices in the pathology department.

“Apprenticeships are great for those people who leave school wanting to work.  You get to train on-site and build up your skillset whilst getting a qualification. My apprenticeship with Pathways Training and SBUHB has given me a career I love and opened a world of new opportunities. I am currently a healthcare scientist and will now progress to a Level 4 qualification with the possibility to become a Biomedical Scientist.”

Ruth Gates, Apprentice Academy Manager at SBUHB said “NPTC Group of Colleges have worked with SBUHB’s Apprentice Academy for over 2 and a half years and we are very proud of all our apprentices who have achieved their qualifications and moved into permanent roles.  For our organisation, employing apprentices to train into roles is a fantastic way for us to ‘grow our own’ staff ensuring that they have the skills, knowledge and ability to develop their career with us.” 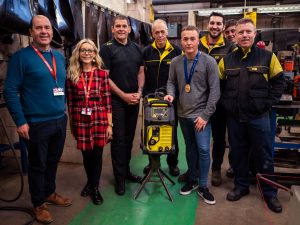 Curtis Rees, a welding apprentice from Neath College, (part of NPTC Group of Colleges) was among the nation’s top skilled young people who were recognised at the WorldSkills National Final last year (2019).

Curtis from Resolven is the first student from NPTC Group of Colleges to win a highly coveted gold medal as he triumphed in his discipline at the NEC in Birmingham.

The prestigious competition saw more than 500 apprentices and students compete in over 70 disciplines to be crowned the best in the UK in a vocational pathway.

Curtis achieved an overall score of 92.25% out of 100 to claim his gold medal, the first for NPTC Group of Colleges in any national competition.

Work-Based Learning Manager at Pathways Training, Alec Thomas was delighted with Curtis’s achievement and said: “Pathways Training is extremely proud of Curtis’s achievement.  During his apprenticeship with us and Afon Engineering, Curtis has excelled in both the academic and practical elements which have supported his campaign. Curtis’s enthusiasm for welding and WorldSkills UK is infectious and he is already encouraging new apprentices to be involved.  This can only be good for the industry and local businesses, and will help to support the development of new opportunities for young people in the area.”

Curtis has big plans for the future, he has aspirations to run his own business within the field of structural welding, where he has spotted a gap in the market. 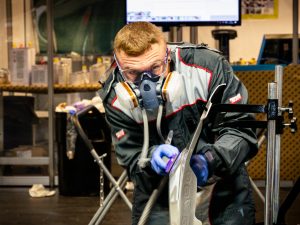 Auto Refinishing Apprentice Joshua Jones has won a place in the WorldSkills UK Talent Programme ahead of the 2021 WorldSkills Final in Shangai.

Josh is currently undertaking an Apprenticeship with Pathways Training (the College’s work-placed learning provider) and he spends four days a week on placement at Swansea-based vehicle body shop ‘Scuffed Up’.

Josh hopes one day to run his own vehicle body shop, but until then, is enjoying earning whilst working at learning.

He said “I’ve worked really hard to get to where I am now, constantly improving my techniques and honing my craft, both at my workplace and during my study days at College. Being able to work at the same time as studying has been invaluable, as I learn new things every day at Scuffed Up; there are different kinds of jobs coming in every day on all kinds of cars, so you have to be adaptable. The sense of satisfaction when a customer leaves us happy is second to none, I really enjoy that.”

Josh had these words for anyone thinking of becoming an apprentice: “I would recommend an Apprenticeship with Pathways training to anyone. I loved it from the day I first walked through the door; I am learning and developing every day. It helps that I get paid as well!”

Katie Said: “By completing the apprenticeship I have got a job as a band 2 Healthcare Support Worker and gained a recognised qualification. I have really enjoyed meeting lots of people and learning from experienced staff on the ward.

My new job role is similar because the care that is expected of me is the same, however, the ward is a different pace and different speciality so I’ve learnt new skills and I’m always learning more about different medical cases.”

If you are interested in finding out more about our Apprenticeships, you can contact Pathways Training on 01639 648064 (Neath/Port Talbot) or 0845 4086 253 (Powys) or by email at: pathwaystraining@nptcgroup.ac.uk