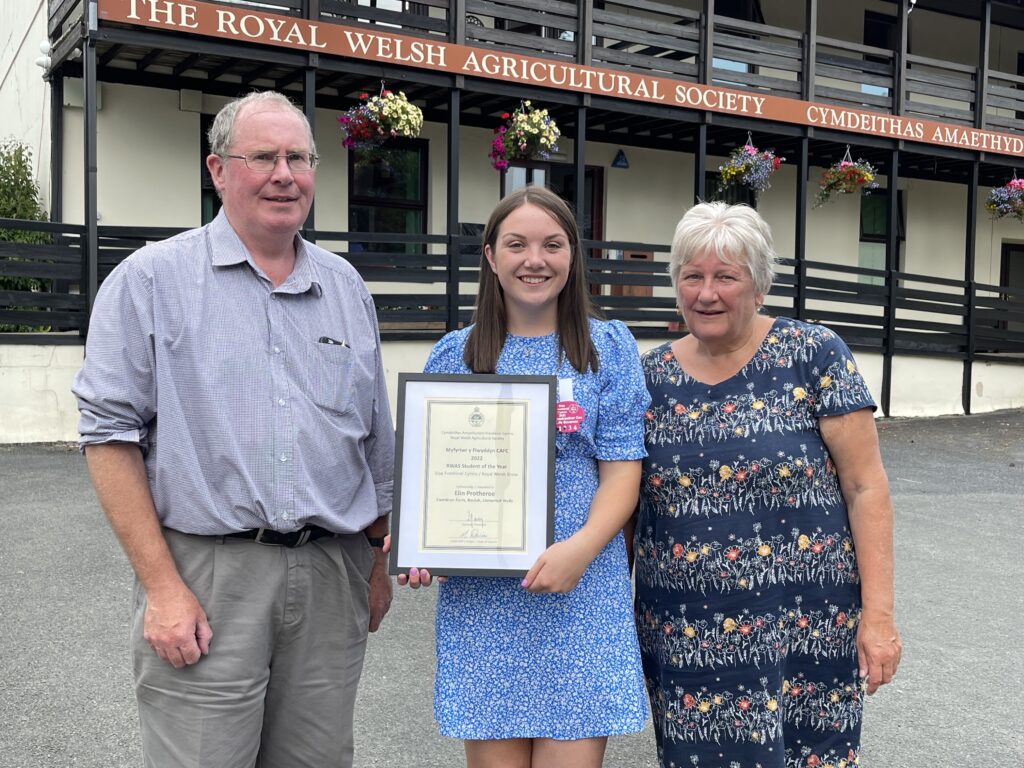 Elin has earnt her win showing high levels of commitment to her HND Agriculture course. She is heavily involved in the running of her family farm and is the secretary of her local YFC group. At a county level she has held the position of Youth Forum Chairman and has been awarded Junior Member of the Year. She competes in YFC Wool handling competitions and has won the YFC Wool handling competition at the Royal Welsh Show and the Novice All-Nations award allowing her to compete in the Welsh Team at the Royal Balmoral Ireland. She has also competed in stock judging competitions, public speaking and Fferm Factor.

Elin gives a considerable amount of her time to the community and has recently taken on the role of sponsorship secretary for the Welsh International Speed Shear which is run alongside the Royal Welsh Show as a fund-raising event. Earlier this year Elin was awarded the prestigious LANTRA learner of the year for persons aged 20 years and under which recognised her contribution to the land-based sector in Wales. She has been working at distinction level throughout her HND course.

Neil Bowden, Newtown College agriculture lecturer said: ‘Elin is an attentive student who always participates fully and gets involved in class debates. Her research project was especially interesting since it looked at the role of Welsh uplands farm towards feeding the nation, a topic area Elin is very passionate about. Elin has been a fantastic student. She is a great ambassador for NPTC Group and agriculture generally. I wholeheartedly congratulate her on her achievements.’

Martin Watkins, land based estates manager and deputy head of Catering, Horticulture and Agriculture said: ‘We are all proud of Elin’s accomplishments. Elin has worked hard at college and as such has had a positive influence on her peer group. She is also a finalist in the nationwide journal- ‘Farmers’ Weekly’, Student of the Year Award, which is also a fantastic achievement.’

Elin said: ‘I am really pleased to win this award at the Royal Welsh Show. The show has always been an annual event for me and my family and it’s great to win here. My plan now is to “top-up” my HND qualification with a degree and I have been accepted at Aberystwyth University.  I’m then hoping to travel across the world to gain new experiences through working in different countries, particularly Australia and New Zealand.  My long-term ambition would be to return home and work alongside my family on our beef and sheep farm’.