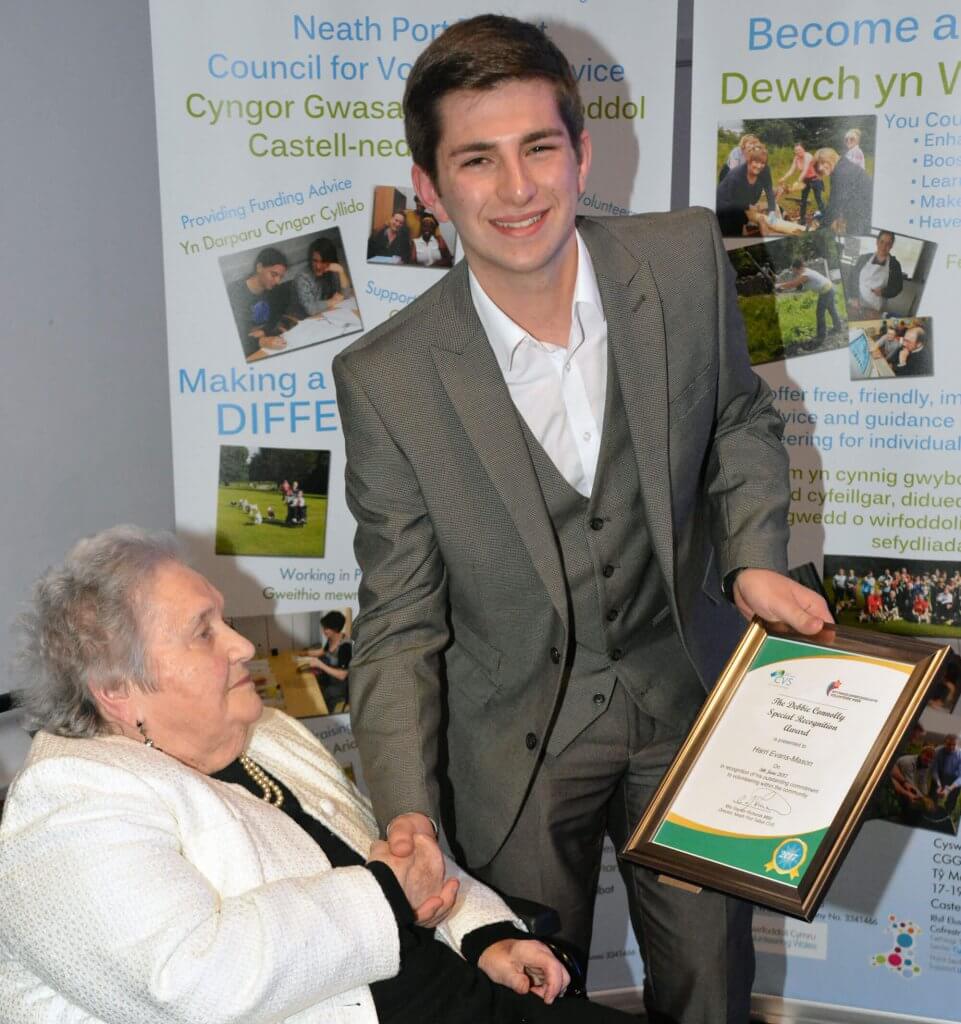 He may only be 18 years-of- age, but Neath College student Harri Evans-Mason is proving to be an inspiration to all who come into contact with him.

Volunteer Harri has received a prestigious award from Neath Port Talbot Council for Voluntary Service (CVS) in recognition of ‘the wonderful and effective volunteer’ that he is.

He also got a mention in despatches in the Senedd by Neath AM Jeremy Miles who spoke about the many successful volunteering programmes in Neath Port Talbot which have  inspired him, including the ‘extraordinary example’ of Harri.

“At the age of just 18 he has given so much of his own time and in so doing inspired others to do the same. These are some of the many individuals and organisations that give so much every day and often transform the lives of others,” said Mr Miles.

Harri, who is currently studying for his Applied Business A-Level and Welsh Baccalaureate at Neath College is also President of the College’s Student Union and was instrumental in developing its constitution and driving the recent SU elections. He has also been a board member of Neath Port Talbot Children’s Rights Unit for two years where he has developed and delivered the Young Trustee accredited training to a diverse range of young people; he is the President of Interact, the youth section of Neath Rotarians; he is the youth representative on Pontardawe Town Council; Youth PACT and a member of the recently established youth board of ABMU.

During Volunteers’ Week Harri was presented with the prestigious Debbie Connolly Special Recognition Award by Mrs Margaret Thorne CBE DL who is the President of CVS. The award highlighted his work to encourage the engagement and participation of young people to get their voices heard to influence and inform the policies and processes that impact on their lives.

Gaynor Richards, Director of Neath Port Talbot CVS said: “Harri is an exceptional young volunteer and we are pleased that he has received this much deserved special award that recognises the incredible commitment he has given to supporting and encouraging others through his volunteering; he is huge example to all of us and a real inspiration.”

Sian Jones, the College’s Vice Principal Student Services said: “Harri is a credit to the College. His hard work and commitment to helping others has been recognised and we are delighted as he has been a tireless advocate for the student voice in College.”

Picture: Harri being presented with the prestigious Debbie Connolly Special Recognition Award by Mrs Margaret Thorne, CBE DL who is the President of CVS.