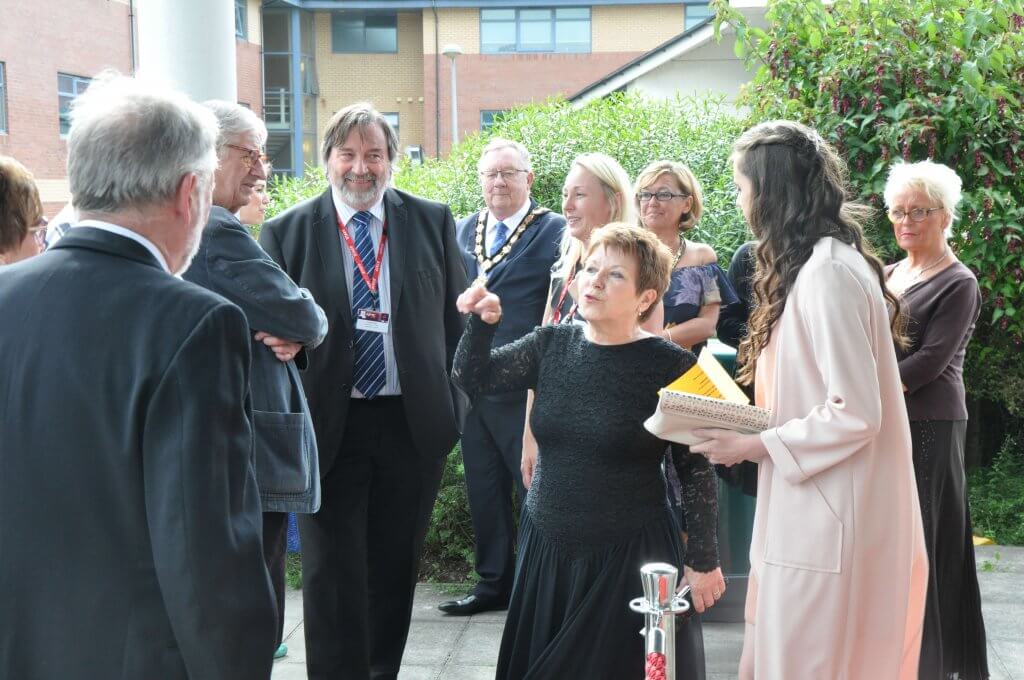 A few young people got a taste of fame recently as they walked the red carpet at the premiere of a new film they have developed using Richard Burton’s teenage diaries.

The Hollywood star and heartthrob was also a prolific diarist, and thanks to £34,000 of National Lottery funding young people from Burton’s hometown have been using his writing to uncover the social history of Port Talbot and its inhabitants, from the 1930s to the present day.

Taking advantage of the Richard Burton Archives at Swansea University, a group of 41 students at NPTC Group of Colleges have worked together to research, develop and produce a film to document how different – or not – the issues facing a young Burton were from those experienced by today’s local teens.

Preparations included visiting local landmarks that were important to the young Burton, watching some of the films that were showing in cinemas at the time and interviewing other local people, including the likes of fellow Port Talbot actor and present day Hollywood star, Michael Sheen.

Richard Bellamy, Head of the Heritage Lottery Fund in Wales, said: “This project funded by National Lottery players represents a unique opportunity to view a community’s historic development through the eyes of a global icon. The artistic and skilful ways in which the young people have done just that is a fitting tribute both to the star himself and Port Talbot.”

As well as developing new friendships and interest in the place they’ve grown up, the youngsters also gained technical skills by using training in video recording, oral history, archiving, digital and arts skills to re-tell the town’s story.

16- year old Dominic Jones, who took part in the project, said:  ‘There are so many episodes in Richard Burton’s life that became turning points, each taking him in a different direction. It has made us think about the turning points in our own lives, and how we deal with them. I’ve loved doing this project – researching Richard Burton and his life in Port Talbot and making a film about it has been challenging and really interesting. I’ve also had a chance to talk to my granddad about the past and I’ve grown to love history even more.”

After his mother’s death when only two years old, Burton – or Richard Jenkins as he was at the time – was taken in by his sister and her husband. There was little spare money in the family, so to earn enough to visit the cinema Burton collected newspaper wrapping for his fishmonger aunt as well as collecting and selling dung from a nearby hillside to a local fertiliser merchant. After Richard showed artistic promise in school, English teacher Philip Burton took him under his wing, giving him acting, elocution and language classes before becoming his legal guardian when Richard was 18 – and giving Richard his own name.

It was from this childhood wrought with change that Burton’s acting career was built, with Burton going on to achieve worldwide fame and fortune, enough to buy the world’s most expensive diamond in 1969 for his film star wife, Elizabeth Taylor.

The film will not only become a lasting resource for the community, but it is hoped that in the future the young people’s project may lead to the creation of a regular celebratory event to promote the area’s creative talent – both past and present – and ensure this important story continues to be told.

In the meantime, Taliesin Arts Centre will make available the Great Hall at Swansea University Bay Campus as a venue for showing a collection of artwork and artefacts created and collected by the youngsters so far. From September a new group of young people will also be working towards celebrating Burton’s birthday in November, and planning more events to share and showcase their findings.

Julie Mercer, Head of School for Foundation Studies and Adult Community Learning at NPTC Group of Colleges, said: “Our students have worked incredibly hard on this challenging project, and it has been rewarding to hear first-hand how it has helped inspire these young people to push themselves to achieve more, developing the confidence and skills to see them into the future and raising their own aspirations as a result.”

16 yr old Kieren Johannes said: “I have learned more about the place I live, its past, the present and a future we have the potential to create.”

Eirwen Hopkins of Swansea University, who leads the Burton@14 project, said: “The Richard Burton Archives hold an extensive collection of Burton’s original writings, and the young people quickly realised that some people in Port Talbot have little idea of the real man, despite hailing from the same streets as he walked.

“Burton’s stardom left a huge legacy for the town, but the town also impacted strongly on him as a young man growing up in south Wales. His private diaries have reconnected local young people with the history of personal, social and artistic change that is right on their doorsteps and rekindled their own creativity in the process.”

Jeremy Miles, AM for Neath said: “What a great experience for these young people to investigate their local history, which can often fall by the wayside in favour of key national and international historical events. To play such an active role in producing this film resource for the community will mean a lot of good memories for them to take forward in the next stages of their lives, and I wish them all the best.”

Stephen Kinnock, MP for Aberavon added: “I am thrilled to see all the hard work the students have put into this unusual and fascinating project, working together to bring the history of Port Talbot and Richard Burton to life not just for themselves but for everyone else in their community. Congratulations on a job well done, and thank you on behalf of Port Talbot.”