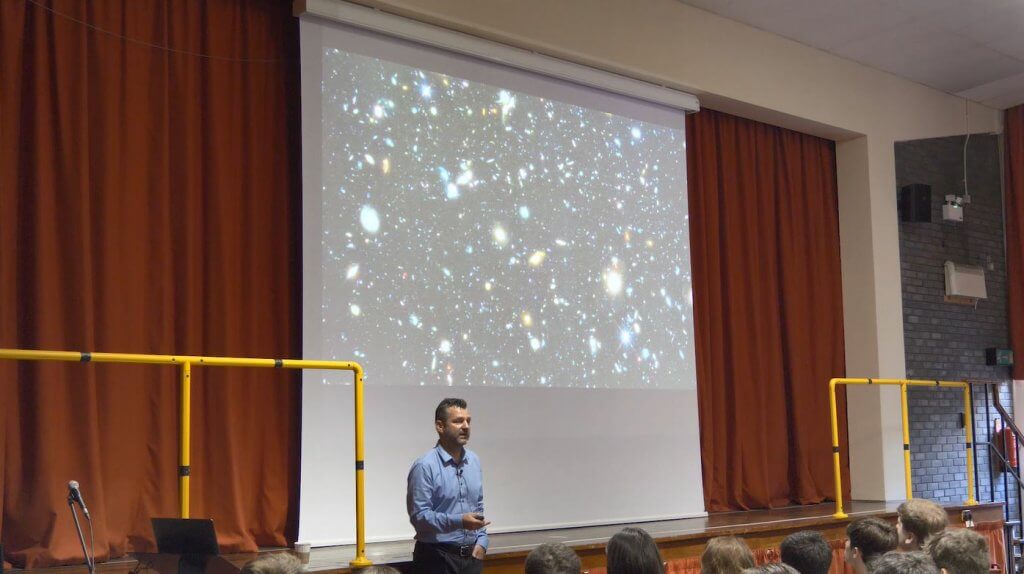 Will there forever be stars in the sky? Will humanity roam the cosmos for eternity? What does the future hold for our Universe? These were some of the questions posed by eminent Astrophysicist, Alumni and Honorary Fellow, Professor Geraint F. Lewis, as he visited NPTC Group of Colleges last week.

We joined Professor Lewis, Professor of Astrophysics at the Sydney Institute for Astronomy, for a journey through space and time at Neath College. In his forty five minute seminar, entitled ‘Life, the Universe & Me’, Professor Lewis spoke to students about such awe-inspiring topics as galactic cannibalism, gravitational lensing and dark energy, as well as telling us about his own journey from NPTC Group of Colleges to Sydney University.

Professor Lewis was born in Neath and raised in Seven Sisters and Crynant, attending Llangatwg Comprehensive before joining Neath Tertiary College, where he studied A Levels in Mathematics, Physics and Geography. He completed his first degree at the University of London, at Queen Mary College, and PhD at the University of Cambridge’s Institute of Astronomy. He has worked in the State University of New York at Stony Brook, the University of Victoria in Canada, and the University of Washington in Seattle. After these research positions in the US and Canada, he then became a Research Astronomer at the Anglo-Australian Observatory in 2000. In 2002, Lewis joined the University of Sydney where he is currently the head of the Gravitational Astrophysics Group.

In his seminar, Professor Lewis delved into one of the greatest quandaries of our time, the question of dark physics! He explained that a large part of his work focuses upon the ‘dark-side’ of the universe. On a broad scale, his program involves looking at the influence of dark energy and dark matter on the evolution and ultimate fate of the universe. Professor Lewis told students about the thousands of cosmologists across the world who are currently working round the clock to find the answers that will change our universe forever.

Professor Lewis then challenged students to follow their dreams, telling them to “make sure you’re interested and you want to do it, and listen to advice.” At the end of the seminar, Professor Lewis left us all some key questions to consider: “Is there dark physics” and “how could the universe have been different?” He also answered a number of questions from keen cosmologists in the audience, including: “Which is your favourite galaxy” and “is there life in the cosmos?”

If you weren’t able to join us for Professor Lewis’s seminar, you can watch it in full by clicking HERE.

Stay tuned for an exclusive interview with Professor Lewis, where we delve deeper into his life’s work and find out what first inspired him to become one of the world’s leading cosmologists.

We have a range of courses available where you can begin your journey, just as Professor Geraint Lewis did.