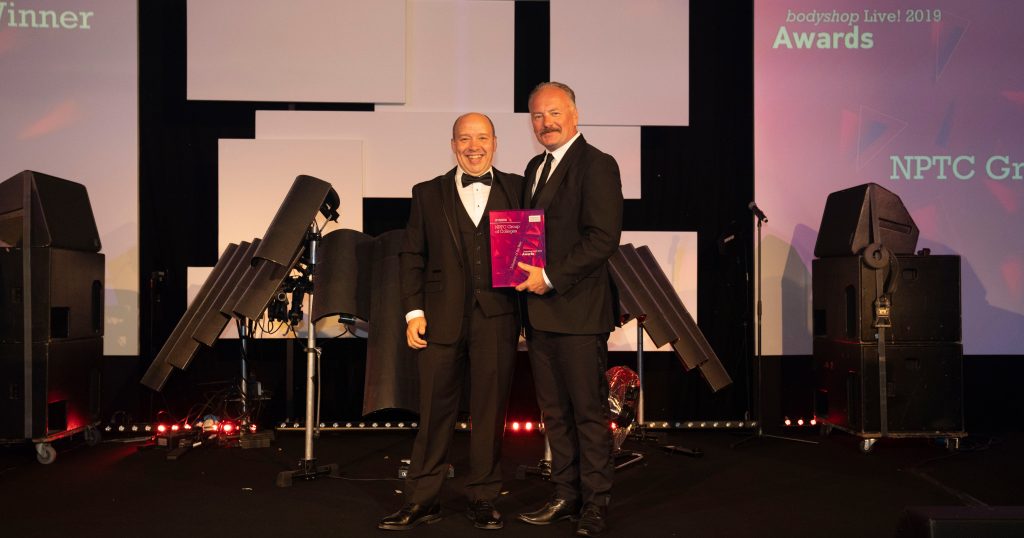 The specialist motor vehicle body repair team at Pontardawe College (part of NPTC Group of Colleges) are over the moon instead of under the bonnet, after being named Educator of the Year at the Bodyshop Live Awards 2019.

They received the award when bodyshop Magazine celebrated the best and brightest in the collision repair industry with a glamorous end-of-conference awards dinner at bodyshop Live! 2019 – the most respected and prestigious expo and prize-giving event in the sector. 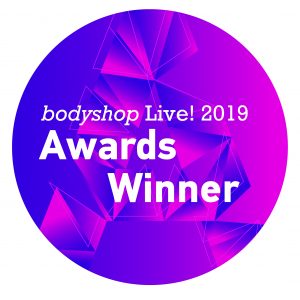 The team were nominated by Chris Bentley of INDASA Abrasives, who used the College facility to host a workshop with other Independent Paint Supplies and FMP in the local area. He was so impressed by the facilities on offer at the College, the first-class equipment and how the facility was run, that he felt he had no choice but to nominate the team.

Nineteen independent awards were handed at out to individuals and organisations from across the entire collision repair industry, including apprentices and senior technicians, assessors, insurers, customer service providers, educators, and body shops both large and small.

The Educator of the Year award showcases the very best examples of organisations who are training the next generation, raising industry standards and generating the skills base vital for the future of the industry, and Bodyshop Magazine could see that NPTC Group of Colleges’ Centre of Excellence for Motor Vehicle and Body Repair had that in abundance.

Launched in 2018, the brand new state-of-the-art facility is the only one of its kind in the area and was developed with industry-leading companies such as Car-O-Liner, Junair, Devilbiss, Sata and Snap-on Tools and boasts a state-of-the-art spray booth with a paint mixing room, wheel refurbishment booth and a high-intensity heating bay The facility deals with all aspects of vehicle body repair including; removing and fitting non-welded, non-structural body panels, removing, replacing and repairing non-structural body panels, MAG and spot welding, Identifying and rectifying body misalignment (JIG work), colour matching – metallic and pearls and blending.

Incredibly, within its first year, auto refinishing apprentice Joshua Jones from Swansea based body shop Scuffed Up took silver in the World Skills Wales competition final and went onto compete in the World Skills UK qualifiers (one of only eighteen of the top apprentices in the UK), held at the international 3M Training centre in Atherstone in Warwickshire. He has won a place in the World Skills Live UK Final (one of six finalists in the whole of the UK) in the N.E.C Birmingham this November, which serves to highlight the quality of teaching available at the centre.

Richard Hutchins, Lecturer for Vehicle Body Repair and Refinishing said “the whole team was in shock when the College was announced; we just couldn’t believe it, we were up against some of the best training providers in the UK and to win is just unbelievable. Myself and the team are very dedicated and passionate about the industry and I think this award recognises all that hard work and enthusiasm we’ve put in to make the new centre a success.’’

Mark Dacey, Principal and CEO of NPTC Group of Colleges added: “This award is just testament to the hard work and commitment of the staff at the centre of excellence for motor vehicle. This tops off a fantastic year for the college who has already been named top training provider in Wales at the School Leaver Awards 2019 and the new Sixth Form Academy Hub was recognised for improving the student experience at the Education Building Wales Awards. We have invested in our facilities to give students an excellent learning experience that prepares them for their chosen careers.’’

If you have a passion for cars, are interested in vehicle body repair, spraying cars with the latest designs, or restoring classic motors to their former beauty, then please search NPTC Group or call 01639 648000.