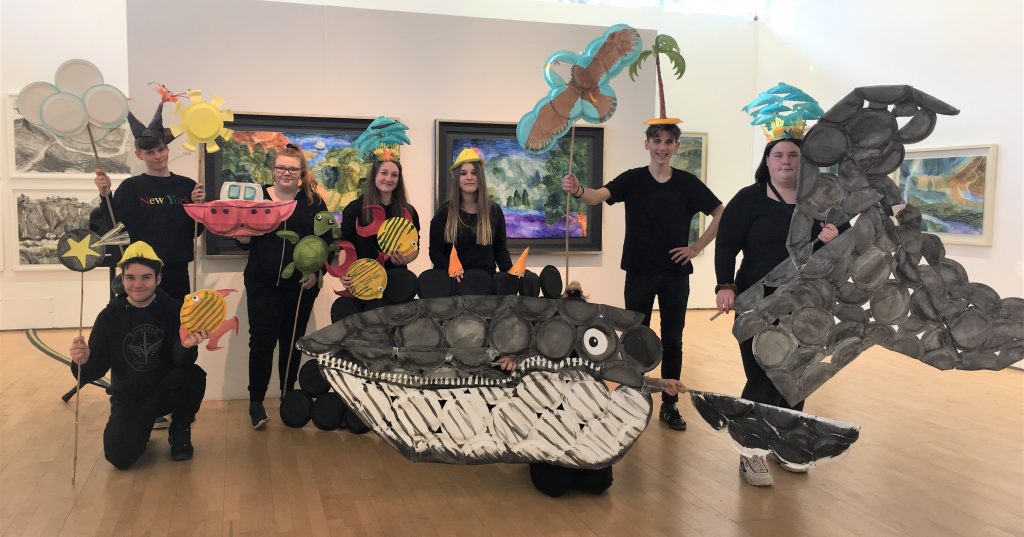 Newtown College Performing Arts students were pleased to entertain pupils from St Mary’s Catholic Primary School and Ladywell Green Infant School at Oriel Davies Gallery Newtown on Monday 18th November as part of a short production of ‘The Snail and the Whale’.  This adaptation was of the popular children’s story written by acclaimed author Julia Donaldson CBE, well known for her popular rhyming stories and Axel Scheffler, illustrator and was directed by local artist Suzy Kemp.

Suzy, who is studying for a PCGC at Newtown College, worked with the students of Ovation Theatre Company to bring together a short puppetry performance of the story as part of her studies. She created a colourful, imaginative set of sea creatures together with an impressive large whale and not forgetting a tiny snail.  All props were carefully produced using biodegradable materials. In total 570 sugar cane plates were used to bring to life the adventures of ‘The snail and the Whale’. Powys Arts Bursary were responsible for funding the materials.

The performance used interaction to amuse its young audience which included lots of creative fun and energy. The response from the children was fantastic and later Suzy expressed how much she had enjoyed the project, thanking those that had supported the production including special thanks to Macmillan Publishers for giving their permission to use the story book, the Oriel Gallery, Mike West for the music and the students for bringing her vision to life.