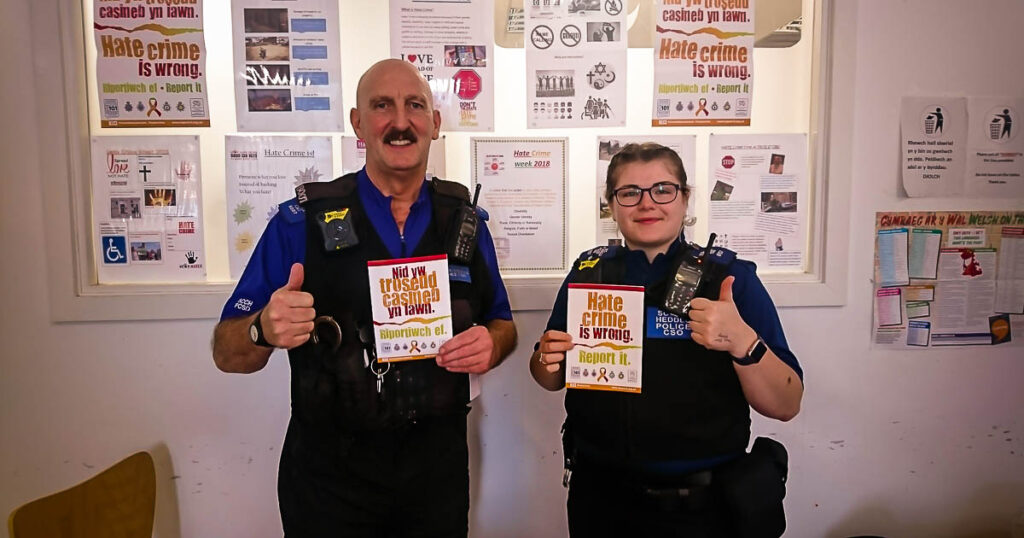 The discussions were part of the Hate Crime Awareness Campaign, a national event that aims to increase knowledge and understanding of hate crime, encourages the reporting of these crimes, and promotes the importance of communities standing together against intolerance and prejudice.

This year discussions were held online with some students working remotely and others in college. PCSO Graham Jennings and PCSO Aileen Stewart provided information and advice to students and listened to their understanding of prejudice, discrimination and discussed current issues.

Discussions considered the victims of crime and recognised the role of the Victim Support agency. Victim Support Cymru recently launched its hate crime charter, which brings the rights of victims of hate crime to the forefront and encourages organisations to adopt the charter to show their commitment to playing a part in tackling hate crime from providing support and information to victims to raising awareness.

Both PCSOs also raised awareness of the Pegasus Scheme, which is a scheme to help people with communication difficulties to converse with the Police. The service is designed to make it easier for people in the Dyfed Powys Police area to communicate with police quickly and easily on both the 101 and 999 numbers. Application forms for the scheme are available from the local Neighbourhood Policing Team.

The Police also reminded people that they do not have to tolerate hate and prejudice and that it’s not acceptable for people to live in fear just because of who they are. There is no home for hate in Wales.

Discussions were then followed by a question and answer session. It provided a valuable opportunity for learners to understand different support networks in the community and also develop their skills and confidence interacting online.

Lecturer Sarah Welch said: “The online meeting went well and allowed students to maintain interaction with outside agencies who link with the College.”