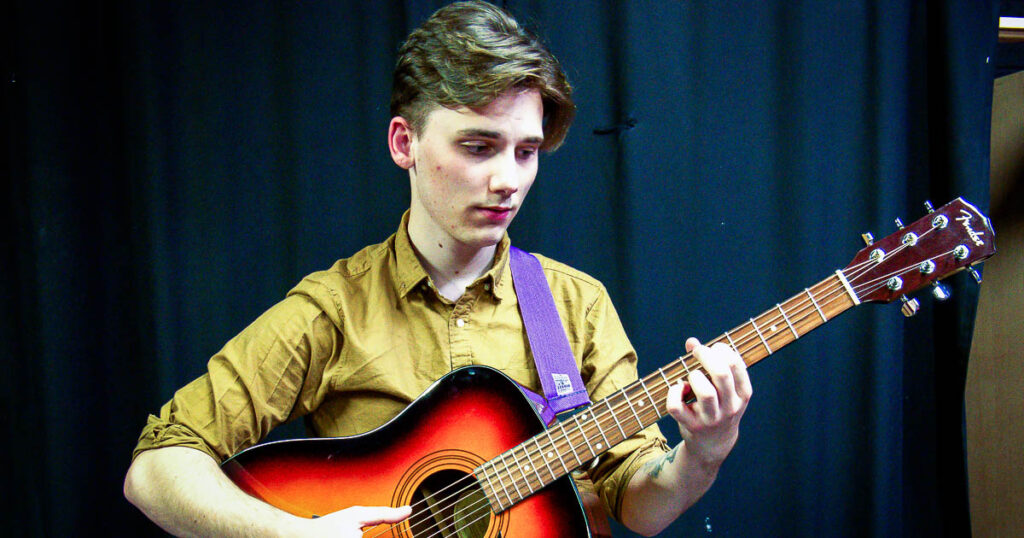 NPTC Group of Colleges Performing Arts student Joe Jones from Newtown College developed his musical talents over lockdown and has launched his very own album.

Joe was introduced to music at a young age by his father who is also a musician. However, it wasn’t until his teens that he took more interest in playing. He began to enjoy music more and with internet tips and tutorials it gave him the freedom to become creative and develop his own style.

During lockdown, Joe found more time to be reflective both in his music and what was happening in the world around him. He found himself developing concern and compassion for those who had experienced war and time spent in war-torn environments. His interest in this intensified on learning of a friend’s appointment to work in the armed forces. He decided to write an album that explored the journey of a soldier returning from the war with Post-Traumatic Stress Disorder (PTSD). He’d immersed himself in Jazz and Blues music and enjoyed the talents of artists including Miles Davis.

The album ‘We Were Just There’ was recorded at home using just his PC – digital audio workstation, guitar and piano. Developing the structure to tell the story through the tempo, rhythm and chord structure which also included sampled effects from baby cries to crowds and sirens. This progressive piece of music seeks to make a connection with the experiences of someone returning home after war, falling in love to having a baby, then struggles with emotions and finally the onset of dementia symbolised with a change from guitar to piano depicting memories that fade as the mind wipes all that has been seen and the emotional ties.

Joe said, “I’ve learnt a lot from this experience having known little about recording and audio previously”. He said he decided to release the album via youtube without cost in order to reach an audience. When asked if he planned on doing another album. Joe said, “Well I enjoyed the experience but also the seclusion of lockdown meant I had more time available than usual to dedicate to the production. We’ll see, maybe.”

Lecturer Elizabeth Hebden said: “We are all so impressed with Joe’s talents and proud of his dedication to exploring this medium, adding another string to his bow as an artist.”