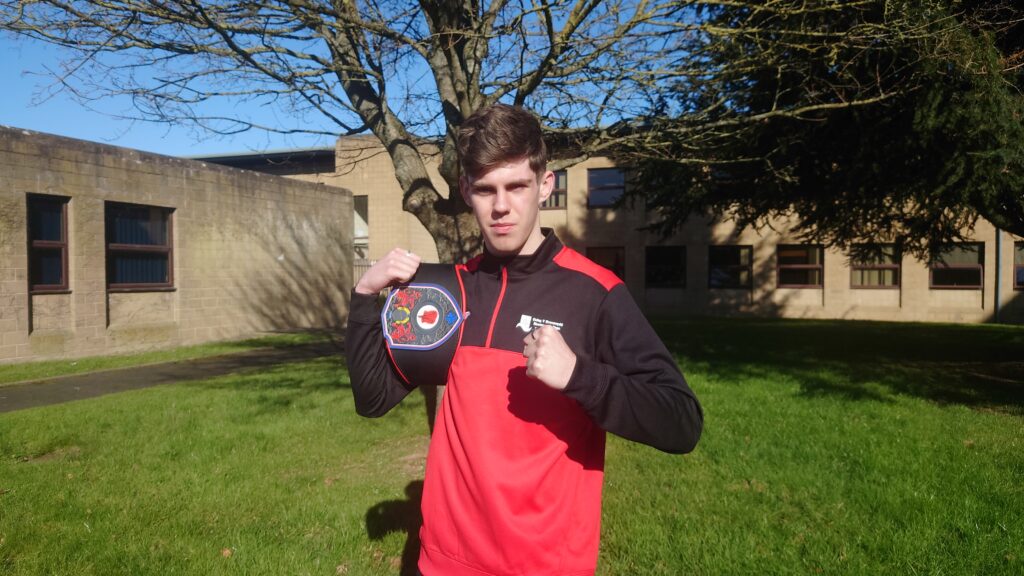 Owen, 17 years-old from Llandrindod has now earned the title of UK and Welsh champion in his 65kg weight category after emerging victorious at The Rock, venue, Ebbw Vale at a Ken Coughlin sponsored event.

Owen’s interest in boxing followed the path of dad Martin, who was an amateur boxer for a number of years. Martin now coaches at Nicks Gym and Boxing club in Llandrindod wells.

Owen said: ‘I won the Welsh title last year and am really pleased to be Welsh and British amateur junior champion’, but added that it could have been a whole different story as he nearly missed the fight altogether after suffering a painful injury to his thumb just days before the event.

‘I nearly pulled out, but in the end we strapped up my thumb and I went on to win.’

Owen who is in his first year of a Level 3 National Extended Diploma in Coaching and Development at Newtown College said: ‘I was thinking about becoming a coach and came to the College to an open evening, had an interview with lecturer Amy Watkins and knew immediately it was what I wanted to do.  I’m so pleased that I made that decision as the lecturers have been really supportive.’

He went on to say ‘having peers around that are both interested in sport and are also competitive helps to motivate you and the course keeps you thinking about elements of fitness, nutrition and training so it all helps to keep me focussed.

‘I want to be a coach like my dad eventually, but I also want to have a few more fights to defend my titles and perhaps fight for a European or national title too’.

Lecturer Amy Watkins said: ‘We were so excited for Owen. He’s a competent student, who puts a lot of effort into all he does. He was recently awarded a bursary from the College to acknowledge his effort and drive and this will help with funding his chosen interests. He deserves to do well and it will be a pleasure to watch him develop.’

If you are interested in finding out more about our Sports courses, please visit our website or why not come along to one of our open days.