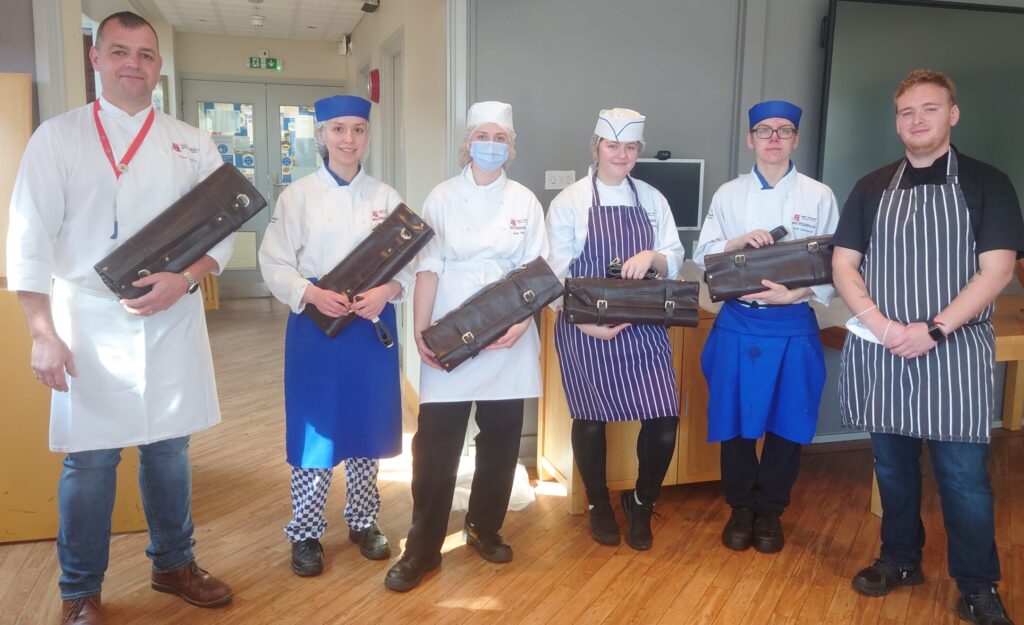 Newtown Catering Students were fortunate enough to welcome back former student and now popular Chef Jamie Tully. Jamie studied Professional Cookery at Newtown College before going on to become a private chef to the super-rich and famous and owner of his own company Culinary Genius Store. Jamie has cooked for clients including The Sheikh of Dubai and celebrities such as Justin Timberlake and P Diddy.

He began with a little introduction about himself telling students of his early days working in the local guest houses and hotels whilst studying on the Level 1 and 2 VRQ before going on to work under the guidance of a well-managed Kitchen at The Lake Country House Hotel and Spa near Builth Wells as a Commis Chef after completing the Level 3 NVQ. When he left there he was the Pastry Chef de Partie and he went on to work in large Chalets in the Ski resorts of Austria, before applying to work on Superyachts.

Jamie provided students from Professional Cookery, VRQ Level 1 and NVQ Level 3 with a demonstration of techniques to achieve a well-balanced smooth and creamy, tasty risotto. He continued to fascinate the students whilst cooking with tales of his seafaring adventures among the rich and famous and telling of useful tips he’d gained from working with chefs from around the world.

After the demonstration he ran a culinary competition for students to create a tasty risotto of their own, giving away four fantastic prizes worth £150 each to the best-cooked dishes.

The lucky winners to receive Jamie’s ‘Culinary Genius Store’ branded leather knife rolls were; in first place cooking a risotto with roasted peppers and a hint of chilli was Nina Petryszyn, second place went to Gabi Wilson, third place to Josh Edwards, who had also assisted Jamie with prep for his risotto demo and runner up was Cailin Francis.

Catering Lecturer Shaun Bailey thanked Jamie for giving up his time to visit the College, for sharing his expertise and for donating the fabulous prizes.

Shaun said: ‘Jamie’s career path from College to Superyachts and running his own business, shows students that there is a wealth of different sectors that chefs can work in. His depth of knowledge has developed from each opportunity, and he was a great inspiration to our students, all of which were really motivated by his presence and made a fantastic effort with their risottos’.