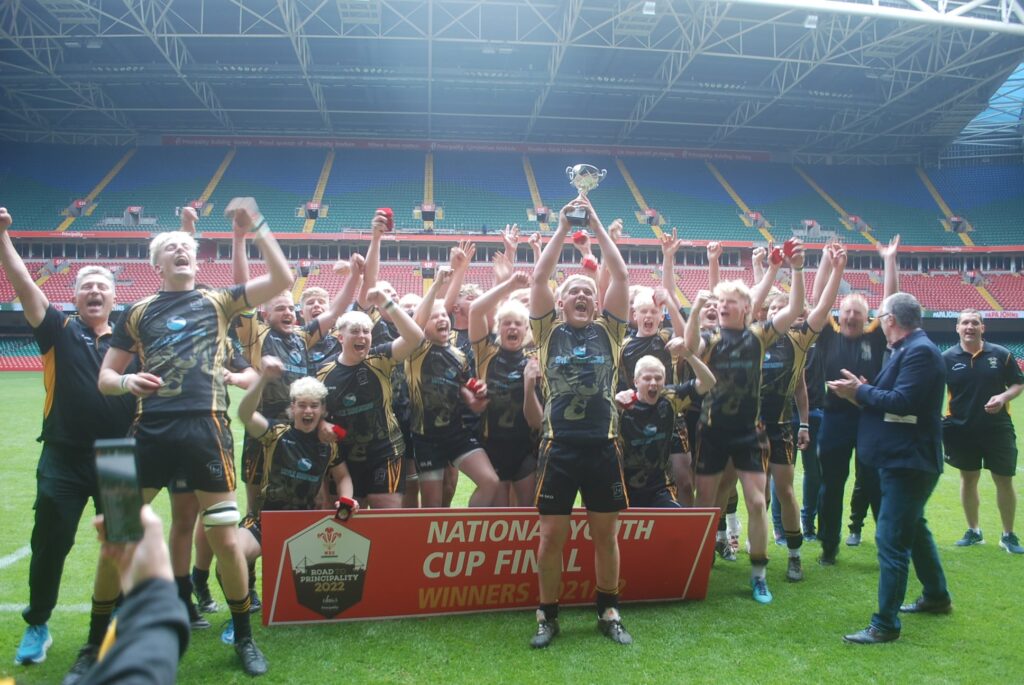 This unbeaten side included seven students from NPTC Group of Colleges’ Schools of Construction and the Built Environment and Building Engineering Services. Four of the students’ study at the Brecon Beacons college: Morgan Price, Daniel Mcgoughlin, Rhys Davies and Captain Ryan Hughes.  Whilst the other three are based on the Newtown college: Dylan Jones, Rowan Coyle and Oakley Middleton.

Morgan Price provided the replacement wing to score Builth’s seventh try, while Rhys Davies made three conversions and a penalty to put the finishing touches to a fantastic performance.

The boys were supported at the grounds by 1000 fans who travelled down from Mid Wales to watch them make local history.

Builth Wells Youth team head coach Chris Offa commended the team; “The whole day was a fantastic occasion for our squad, our rugby club, our families and the town of Builth.”

He said: “This particular team are capable of very high standards, and I knew they were capable of winning the national cup which is why we entered the premier competition this year.”

After their Cowbridge came and the weekend, The Bulls have a further two more important games coming up – Penarth away on Saturday May 7th and the final game against Llantwit Fadre on Saturday May 14th. The Bulls will need to win all three matches to have a chance of winning the league.

Captain Ryan Hughes, who is studying Level 2 Extended Diploma in Brickwork at Brecon, said: “As a team we are still coming to terms with what at we have done!! For a team like Builth Wells youth to win this cup is just unbelievable and we hope it will inspire the next generation of Junior rugby players at the club to do the same.”

Oakley Middleton, a student on the Foundation Construction Building Services Engineering – Electrical and Plumbing course at Newtown College, was pleased to share his elation of the event, laughing about the mix-up with his rugby boots prior to the game and going on to say how proud he was of their achievement.

He said: “We felt the support of the whole community and the atmosphere was great and it was great publicity for the club and for the junior and youth team. Now we have our sights set on the Cardiff Rugby Premier League.”