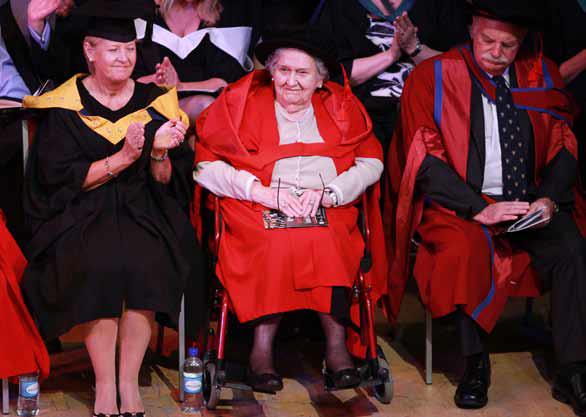 NPTC Group of Colleges is sending birthday wishes to its most senior alumni and Fellow, the remarkable Margaret Thorne, CBE., OBE., who is celebrating 100 years.

Mrs Thorne is well known for her contribution to the voluntary services, and in honour and recognition of the contribution that she has made, she was awarded an OBE., in the Queen’s Birthday Honours in 1984. This award was advanced in the Queen’s 80th Birthday Honours to a CBE., for her work as Chairperson of Neath and Port Talbot Council for Voluntary Services (NPTCVS) and other organisations in Wales.

Mrs Thorne was born and brought up in Kent during the pre-war years and refers to herself as a ‘Maid of Kent’. She is now, however, an adopted and much loved ‘Welsh Lady’. As a teenager, she developed a sense of public duty and her first efforts at volunteering in 1938 involved collecting money for dried milk to help babies affected by the Spanish Civil War. At this time, she attended the local grammar school and planned to go to college. However, fate had a different plan.

At the outbreak of World War II, her life of public service really began. She became a staff member of the Caldecott Community – a residential school for children from troubled backgrounds. During these years, she endured and shared many experiences with the community, travelling with them from Kent to Dorset to avoid bombardment.

At the end of the war, Mrs Thorne returned to Kent and in 1949 she married Ivor, a solicitor in local government, who had served in the army during the war. In 1951, after two moves and the birth of the first of their two children, the couple came to Neath. Here, she soon became involved in the voluntary sector. In particular, she worked with the British Red Cross and eventually became the President of the West Glamorgan Branch. She has also been awarded medal for sixty years of volunteering with them.

Mrs Thorne was the first to be awarded a Fellowship by NPTC Group of Colleges in 2017. Her honour represented a great deal of commitment to her public services duties.

Jill Harding who is member of the Corporation Board at NPTC Group of Colleges and who worked with Mrs Thorne at NPTCVS said: “Mrs Thorne is a tour de force! In fact, she is one of the most remarkable people I have ever met. We send her our wishes and our sincere congratulations.”

Dr Rhobert Lewis, Corporation Board Chair at NPTC Group of Colleges added his congratulations. “On behalf of the College, we wish Mrs Thorne a very happy 100th birthday. What a privilege it is to have such a exceptional lady as a Fellow of the College.”

Acting CEO and Acting Principal of NPTC Group of Colleges, Catherine Lewis added: “It’s an amazing achievement for a very special lady who has served the community with pride and dignity. Many congratulations and thank you from everyone at the College.”