Our Location and Lifestyle for our International Students 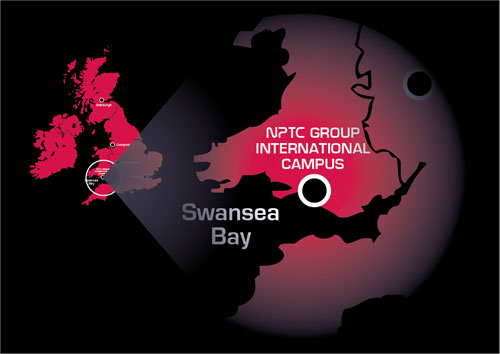 NPTC Group of Colleges is the ideal environment in which to combine studies with a superb quality of life. The College was established in 1931 and has celebrated 80 years of education. On the doorstep of some of the most beautiful parts of the UK, the College is easily reached by rail or road. Our location is perfect for those who like a mix of city life with the tranquility of the countryside and the seaside. Neath College is ten minutes by road from Swansea and 30 minutes by road from Wales’ capital city, Cardiff and two and a half hours by train from London.

From a prehistoric settlement in 2000 BC and a hideout for Viking invaders to the home of the world’s first railway service, South-West Wales has an absorbing history – the golden sand and rugged green hills have so many colourful tales to tell.

It is in a fantastic location, being an area of outstanding natural beauty, with a great culture, very lively nightlife and the biggest indoor market in Wales. This lively and welcoming atmosphere makes this part of the world the ideal place for learning! There is something for everyone: history, culture, beaches, and nightlife!

OYSTERMOUTH CASTLE
It is located in the village of Mumbles on the Gower Peninsula, an area of outstanding natural beauty with 25 miles of coastline with Mumbles at its head and the early Norman castle situated on a hilltop overlooking Swansea Bay.

MUMBLES AND THE PIER
This is the view from Oystermouth Castle of the bustling seaside town, Mumbles; also referred to as ‘the gateway to the Gower Peninsula’.

NATIONAL WATERFRONT MUSEUM
The £32m National Waterfront Museum of Wales, Swansea is located in the City’s Maritime Quarter. Telling the story of industry and innovation, most displays are interactive and admission is free.

NPTC GROUP OF COLLEGES AND ITS LOCALITY ARE STEEPED IN CULTURE
Wales is proud that it can boast some famous sons and daughters who are worldwide international stars. These include classical singer Katherine Jenkins; actress Catherine Zeta-Jones, and actors Sir Richard Burton, Sir Anthony Hopkins, and Michael Sheen.

THE COLLEGE LOCATION OFFERS THE OPPORTUNITY TO ENJOY SOME MAJOR MUSIC FESTIVALS AND CONCERTS ON ITS DOORSTEP
Recent performers in Cardiff and Swansea have included Elton John; Lionel Ritchie, Ed Sheeran; The Michael Jackson Tribute Concert; Madonna; Kasabian and winner of six Grammy Awards, Adele. At the Millennium Centre in Cardiff, performances include Lord of the Dance; Oliver; Sister Act and Dirty Dancing. All of which have appeared in the West End of London.

Alternatively, why not hop on the train or bus and take a day trip or longer break in London, one of the most vibrant capital cities in the world. You can visit the sights and sounds of the West End theatres, tourist attractions such as Buckingham Palace, Westminster Abbey, and the London Eye, and enjoy world-class artists in concert or on stage.

ART GALLERIES
If you are an art lover, why not visit some of the finest art galleries in our area.

GLYNN VIVIAN ART GALLERY
One of the best fine art galleries in Wales, housed in a specular Edwardian building and a regular winner of UK awards. Among the permanent exhibitions is a collection of stained glass art commemorating Swansea’s worldwide reputation in the craft.

ATTIC GALLERY
The Attic Gallery is Wales’ best independent gallery, situated in the heart of Swansea’s historic Maritime Quarter. It is still one of the finest exponents of grass roots Welsh art.

MUSIC
Wales is the land of song and this is reflected in our celebration of music at local festivals. For sixty years, the Swansea Festival of Music and the Arts has been responsible for a celebration of world-class music, arts and entertainment in the City, centering mainly around the classical genre, opera, and jazz.

Margam Park hosts the annual Margam Festival of Music and the Arts – a major cultural event that spans a whole month and brings all kinds of performances and workshops to the area.

For the last 30 years, The Gwyl Pontardawe Music Festival has brought three days of folk, traditional, roots and world music to Swansea Bay in its annual festival. The Mumbles Mostly Jazz and Blues Festival is an annual highlight enjoyed by music fans from far and wide. This event complements several well-established and respected jazz and blues clubs in the area, which provide entertainment throughout the year.

THE COLLEGE AND ITS LOCALITY HAVE A VARIETY OF ACTIVITIES
Whether you are shopping, eating out or enjoying some leisure time, you’ll find a host of things to do on your doorstep.

SHOPPING
Cardiff, the Welsh capital city, is a 30-minute drive away and has an extensive range of designer shops and facilities, entertainment centers and historical attractions.

In the heart of Swansea City, you can find all the top brands including the likes of Zara, Top Shop, H&M, Miss Selfridge, Marks and Spencer and much more.

Swansea Market, Wales’ largest indoor market, sells everything from antiques to the latest publications and local fresh fish and meat to Welsh cakes straight from the griddle.

Mumbles, the pretty Victorian seaside village to the west of Swansea, has a raft of fashion boutiques, galleries and craft shops trading alongside beach and surf wear stores.

Neath, a popular, historic market town is undergoing an £80 million transformation project. Neath’s famous market, in the town centre, has a raft of stalls selling a variety of local goods and delicacies and where you can sample local home-made fayre.

Carmarthen, the oldest town in Wales, with numerous small shops trading alongside many of the UK’s High Street names, has some unique offerings and retains that special ambience that other towns have lost.

Farmers’ markets are very popular in Swansea Bay, and there are lots of venues that provide opportunities to sample tasty, fresh local produce with huge flavour, but a small carbon footprint!

EATING OUT AND ENTERTAINMENT
Swansea City is without a doubt fast becoming one of the UK’s most talked-about locations for eating out and having fun and catching up with friends. There are scores of restaurants offering cuisine from across the globe to suit most diets. As well as Welsh and British cuisine, you will find tasty treats including dishes from Europe, America, Thailand, India, China, Vietnam and Japan. There are also numerous vegetarian options and, of course, the established chains of restaurants found in most cities around the world. Swansea has a variety of restaurants meeting the needs of a range of cultures and diets.

The Café Quarter, centered mainly around trendy Wind Street, has a vibrant evening scene with pubs, bars, nightclubs, and a new £13 million state-of-the-art casino which along with the expected tables and roulette wheels, offers live floor shows and bands.

The Grape and Olive restaurant is located at the top of the Meridian Tower, which is the tallest building in Wales. It has a mixture of contemporary style with Mediterranean cuisine offering a unique and relaxed experience, where you can enjoy panoramic views across the whole of Swansea.

SPORTS – WORLD FAMOUS FOOTBALL
If you are a fan of world-class football then a visit to the Liberty Stadium in Swansea is a must where you can see Swansea City FC in action. In fact, NPTC Group of Colleges is proud to work with Swansea City FC and NPTC Group was delighted when players joined staff and students in celebrating the College’s 90th birthday recently.

WORLD CLASS RUGBY
In the land of song, rugby is at the heart of Welsh culture and the College is no exception. In fact, it boasts some famous sporting stars. A number of the Welsh rugby squad and the British and Irish Lions squad are former students, and our College rugby team is coached by international rugby stars.

NPTC Group of Colleges has a proud tradition of working in partnership with the Ospreys RFC, one of Wales’ top rugby teams. Excellence in education is equally as important as their sport; several players were recently awarded Foundation Degrees in Coaching and Development after studying at the College.

WATERSPORTS
With the second greatest tidal range in the world and some of the finest surfing beaches in the UK, watersports are a specialty in Swansea Bay. Surfing is particularly good around Gower, and there are several accredited surf schools to choose from. Langland and Caswell Bays, just a few minutes drive from Mumbles, whilst Llangennith, at the western edge of the Gower Peninsula, is noted for the quality of the waves there. To the east of Neath is Aberavon beach. Surfing is just one of the watersports the area has to offer; kitesurfing, windsurfing, sailing, rowing, and kayaking are all accessible.

It’s the ideal place to feel the adrenaline rush. Home to five world-class mountain bike trails, Afan Forest was voted the only UK destination to feature in What Mountain Bike magazine’s ‘ten places to ride before you die’ list.

GOLF
Swansea Bay area boasts some of the most scenic golf courses in Wales – in fact, the spectacular sea views could be a good excuse for missing that shot! Fancy testing your swing over an 18-hole course? With parkland, moorland, championship, and classic links courses as well as Wales’ first Nicklaus-designed golf course at Machynys Peninsula Golf & Country Club, you’ll be spoilt for choice.

To learn more about our prestigious alumni click on the link below: