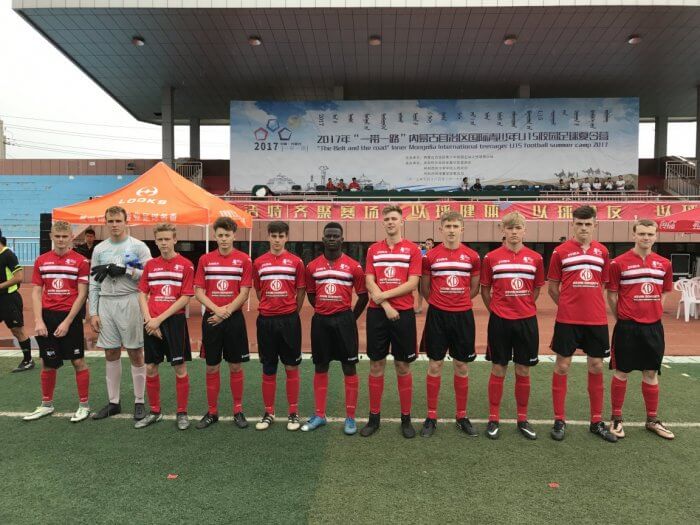 Football fanatic sports students from NPTC Group of Colleges teamed up with Newtown FC to compete in a recent football tournament in Huhhot City, Inner Mongolia (an Autonomous Region of the People’s Republic of China).

The Colleges’ worldwide operations’ team was invited to Inner Mongolia by the Saihan Education Bureau and WEG Education. The football tournament consisted of 12 teams; 10 from Inner Mongolia, a team from Ulaanbataar in Mongolia with Newtown representing the UK (Wales).

A spectacular opening ceremony kicked off the tournament. Traditional Mongolian dancing and mass football-styled dancing were the key features of the ceremony.

From the outset, the Newtown side knew things were going to be difficult with just 11 players making the trip to Inner Mongolia. The environment, surface and conditions were very different to what we are used to in the UK. The pitch was a concrete-based astroturf pitch, average temperature was 30 degrees Celsius and the opposition was fast, agile and up for a battle.  But the students were hopeful that their technical and tactical prowess could assist them to progress through the tournament.

This sheer scale of this event put immediate pressure on the boys from Wales. This coupled with very strict pre-match inspections which included passport picture player identification made the players somewhat anxious.

The first opponents were the host city, Huhhot FC. The game started at a fast pace and the Welsh boys were able to dominate the game finishing with an impressive full-time score of five nil to Newtown. Three points up, the first match was followed by a day of rest and time for a couple of cultural visits.

The best visit and most satisfying part of the tour was visiting a local primary school. Number 18 Middle School invited the students to an exchange of football skills. The whole team felt like celebrities with children offering gifts for the players and wanting selfies.

Newtown College Sports Lecturer Gareth Watkins commented: ‘To see such respect for their elders was great and we all felt very humbled.’

The team was treated to lunch in a 5* hotel followed by a visit to the oldest Buddhist Temple in Huhhot where all the students were impressed by the attention to detail and the sense of serenity.

On day three, the Welsh team faced WuYan. The conditions were the complete other end of the spectrum to the previous match. Thunderstorms had hit the city two minutes prior to kick off and the concrete-based pitch was waterlogged with an hour delay.  However, the puddles favoured our Welsh side. Every through ball was held up in the water and the team raced to a 5-0 lead in the first half. The second half was very much a foregone conclusion. That was until with two minutes to play, a couple of errors in defence lead to the opposition getting two very late goals. Final score 5:2 to Newtown.

The very next day was the semi-final. The conditions for this match were 36 degrees and not a cloud in the sky or hint of wind in the air. Still, the team were confident of progressing. But the youngsters from from Ulaanbataar had other ideas putting high pressure on the Newtown boys throughout the game. We weathered the pressure but rarely created any chances. The opposition found us lapsing concentration at the back. Luckily for us, we had the best goalkeeper in the tournament, Lewis Jones. BTEC Level 3 Sport student Lewis, aged 17, stood his ground and with great power and flexibility he saved the final shot at goal keeping the score 0-0 at the final whistle; but then it was time for penalties. The standard was high and the atmosphere was tense. A big crowd had formed.

Unfortunately, Ulanbaataar took the advantage and slotted home all their penalty kicks and in the process progressed to the final and as anticipated in the earlier rounds victorious, and, tournament winners.

There wasn’t time to heal wounds as the next day the team were in the 3rd/4th place play-off. Like a wounded animal, the Newtown College were aggressive and took just a few moments to take the lead, and from there they didn’t hold back. After the end of the game, they had recorded nine goals, conceded none and played their best football of the tournament. In light of the circumstances with 11 players throughout the tournament, two of which were carrying injury/illness, intense heat and 30 hours of travelling, the lads from Newtown College can hold their heads high.

Gareth Watkins concluded that: ‘In addition to some great football, the players conducted themselves impeccably and carried the Welsh flag with immense pride. We have appreciated this opportunity and thank NPTC Group of Colleges for the opportunity to travel to Inner Mongolia, WEG Education and the Saihan Education Bureau for the invitation, hospitality and experience that none of us will ever forget.’