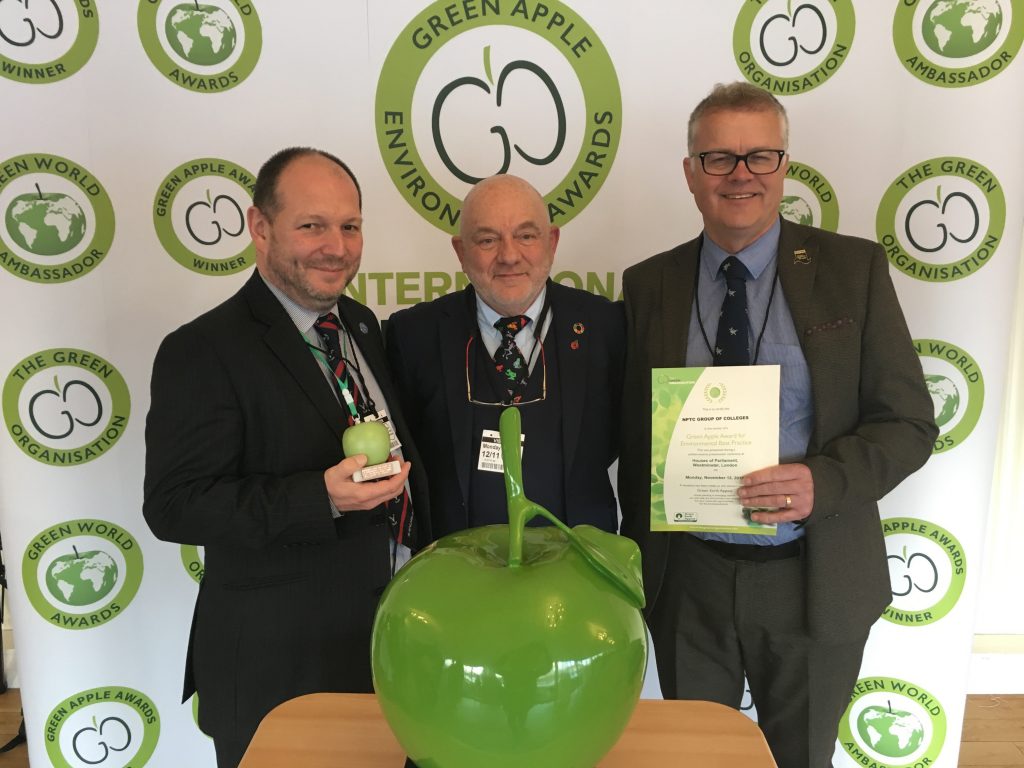 NPTC Group of Colleges is the first college in Wales to receive a prestigious Green Apple Environment Award after being commended for its work in creating a sustainable environment for all of its staff and students.

It joined a number of international companies at the Houses of Parliament, Palace of Westminster to receive the award, after competing against more than 800 other nominations in the Green Apple Awards for Environmental Best Practice with its project, ‘Sustainability – Together The Way Forward’.

The ceremony was hosted by Elizabeth Kendall, MP for Leicester West; and the trophies were presented by Green World Award Champions Ian and Yung Burden of PGT-Reclaimed, Vietnam, in recognition of their success in The Green World Awards.

The Green Apple Environment Awards were established in 1994 as an annual campaign to recognise, reward and promote environmental best practice around the world.

Previous Green Apple Award winners have gone on to win European awards, and many have taken on the status of International Green World Ambassador by helping others around the world to help the environment.

The Green Apple Awards judging panel commented: “NPTC Group of Colleges took the unique decision in 2008 to become a sustainability organisation, championing the movement across the community. They have had innumerable successes over the last decade pushing reductions in all the right places, and they continue to forge ahead at every opportunity.”

Geraint Jones, Assistant Principal for Curriculum, was delighted to receive the award and said:

“It’s a fantastic achievement to be the only College in Wales to have been awarded such a prestigious accolade.  NPTC Group of Colleges continuously strives to improve sustainability; introducing solar energy to campuses, encouraging a culture for recycling as well as paperless working.”