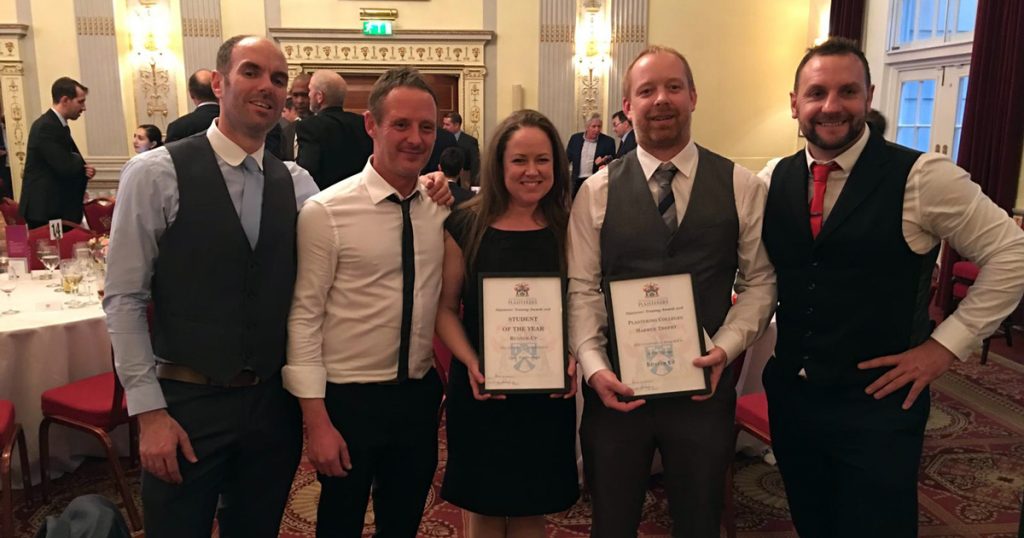 “This is the fifth consecutive year that the College, and the plastering department, has been recognised by this prestigious company. I express my heartfelt congratulations to Lisa on the remarkable achievement and wish her success in forthcoming competitions, and her future career. Congratulations, also, to the plastering team on another successful year.”

You can read Lisa’s full story below.

It’s shaping up to be another successful year for NPTC Group of Colleges’ plastering staff and students. For the fifth year in succession, a student from the School of Construction and the Built Environment has been shortlisted for a Worshipful Company of Plaisterers’ Award.

Lisa Kostromin’s nomination for Plaisterer’s Student of the Year Award was based not only on her wide-ranging plastering skills but also on her inspirational journey to follow her calling.

Despite an early love of plastering and engineering, Lisa’s route into the trade was a circuitous one. From artist to jeweller to receptionist, designer to business owner, Lisa worked hard in a range of fields but could not ignore the call of the craft she had loved as a child.

After getting married, Lisa took the step to follow her dream and enrol on a construction course at NPTC Group of Colleges. Now one of the School’s most talented students, she worked hard to master her craft. Completing the Level 1 course, she decided to take on the Level 2 qualification as an apprentice so she could get the hands-on site experience she desired.

It was then she entered the Advanced SkillBuild Plastering competition, competing against Level 3 students. Qualifying from the south Wales region, she impressed the judges with the quality of her work. She completed her course with distinction grades. She will go on to the SkillBuild final.

After learning she had been shortlisted for the Plaisterer’s award, Lisa said:

“This chapter in my life started at a College Open Evening. I spoke to a plastering tutor about my options, and knew what I wanted to do. I may be a little late to the table, and a touch older, but I am in a position to do what I want. Leaving school, I was discouraged from following my dream because it wasn’t something a girl should do. Foolishly, I listened to that advice, but women are now in a much better place in society and the construction industry.”

“After attending the Open Evening, I was invigorated and enthused with ideas of what might be swirling around my head. I talked it over with my partner and decided to take the risk – both financially and emotionally – to finally do what I’d always wanted: to be a plasterer like my grandfather. To now be nominated for a Worshipful Company of Plaisterers award is just incredible.”

The Worshipful Company of Plaisterers is one of the livery companies in the City of London. The original role of the company was to regulate and check the quality standards of plastering in the capital city. The organisation is now dedicated to supporting education and training in the plastering trade whilst encouraging excellence in the plastering industry.

“Lisa is a remarkable student and a credit to the School. Her plastering work is among some of the best her assessors have ever seen, and this is evidenced by her more than holding her own at competition level against vastly more experienced students.”