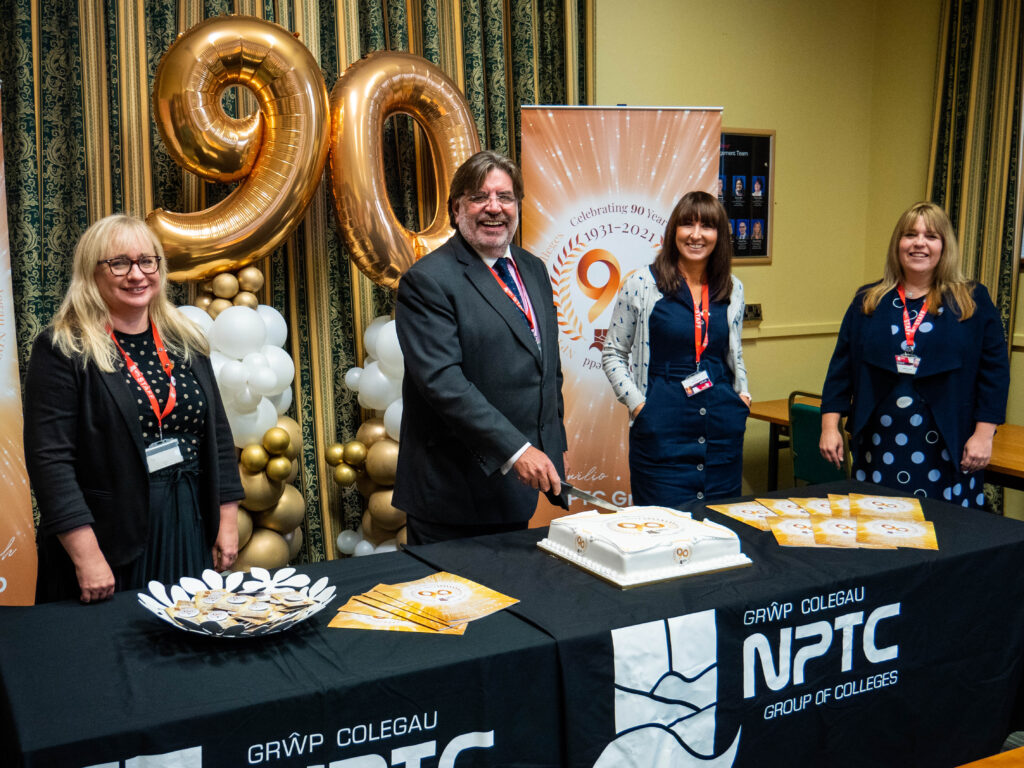 Today, NPTC Group of Colleges celebrates 90 Years of excellence in education and training.

The College officially opened on 28th September 1931, and from very humble beginnings – the establishment boasted only five teaching rooms – it has grown into one of the largest and most successful further education providers in Wales.

Over the last 90 years, the College has seen students achieve success in academic, vocational, sporting and cultural fields, and that success is something that we will build upon as we move into the future.

Today’s event will kick off a year-long period of celebrations to mark the occasion. Global video messages of congratulations came from notable alumni:

NPTC Group of Colleges came into existence on 1 August 2013. It was formed as a result of the merger of Neath Port Talbot College, which was originally two separate colleges until 1999, Afan College and Neath College: and Coleg Powys, which was originally three colleges until 1989; Montgomery College, Radnorshire College and Coleg Howell Harris. The NPTC Group of Colleges is now one of the largest groups of colleges and education providers in Wales and now has an annual turnover of in excess of £65 million.

The College covers over one-third of the landmass of Wales. It operates on four large main centres: Afan College; Brecon Beacons College; Neath College and Newtown College. The Group also has smaller centres including: Pontardawe College; The CWTCH Brecon; Maesteg Construction Centre; Swansea Construction Centre; Llandrindod Wells Campus; and a state-of-the-art Sports Academy at Llandarcy Park. Geographically, this means that there are approximately 100 miles between our furthest campus north and our furthest campus south.

The history of each of the Colleges that form the Group is incredible. Margam Technical College opened its doors in 1952, to support the Steel Works apprentices. Ye Wells Hotel in Llandrindod Wells opened in 1907 but became a training college after the war, in 1947.  It became a residential school for students who were hearing impaired in 1950 and then became an FE college in 1973. Brecon College opened on 20th January 1965 and was called Coleg Howell Harris. Newtown College was purpose built-in in 1981 after changing from Montgomery College, and Hafren opened its doors in 1983.

Even though September 28, 1931, is the official anniversary of the College, further education in Neath can be traced back as early as 1843, when there was a Mechanics’ Institute in Neath. The popularity of the Mechanics’ Institute meant that the building soon became too small, and a larger building was constructed in Church Place in Neath – this building still exists today. But it was in 1931 that the needs of the continuing industrial revolution led to the official opening of the Neath Mining and Technical Institute.

In that first year, there were 50 full-time students, six part-time day students and 741 evening students, giving a grand total of 797 students.

The College continued to grow throughout the ’40s despite the Second World War and in 1946, a new Engineering and a new Science Department was established. In 1949, four extra temporary classrooms were constructed, and the college was officially recognised and renamed Neath Technical College.

It wasn’t until 47 years later that the official merger of Neath and Afan Colleges took place, on the first of January 1999, which saw the creation of Neath Port Talbot College.

Over a decade later, after another successful merger – this time with Coleg Powys – saw the College become the entity it remains today: the NPTC Group of Colleges.

Throughout the College’s history, it has continued to build its reputation for excellence with outstanding results in A Level examinations and vocational programmes, plus sporting and cultural successes. Student achievements have improved year on year with the current overall pass rate, an amazing 100 per cent, with top-performing students progressing to top universities including Oxford and Cambridge.

Today, NPTC Group of Colleges employs well over 1000 people across all of the main campuses and in its eight subsidiary companies which include: LSI Portsmouth, Llandarcy Park Limited, JobForceWales Ltd, Learn Kit Limited, JGR Educate, Green Labyrinth (including EngageCRM), NPTC Enterprises and the Cycle Academy Wales.

Mark Dacey, who has been Principal and Chief Executive of NPTC Group of Colleges for 16 years said: “The College has seen off many challenges in its 90-year history, but the last 18 months may have been the toughest of all. And as we celebrate our 90th year in education I cannot express how proud I am of all the staff and students at the college.  It’s humbling to see how they adapted to the pandemic and how pleased I am to see so many students back finally for face-to-face teaching.’’