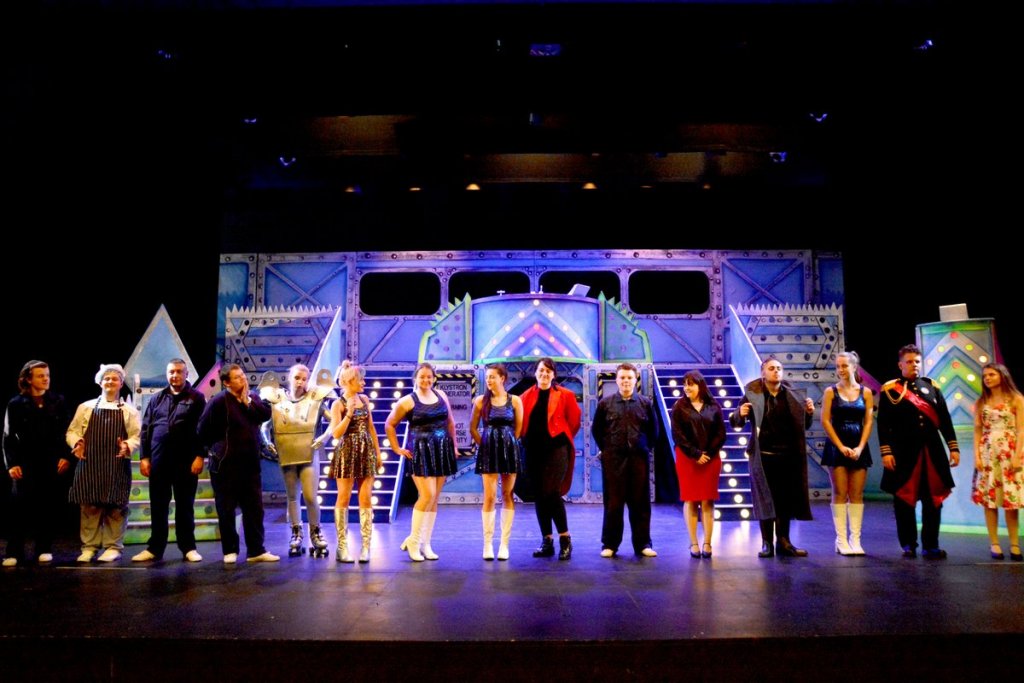 The Ovation Theatre Company, Performing Arts students at Newtown College, put on a sensational show at Newtown’s Hafren Entertainment Venue over two consecutive nights last week. The show ‘Return to The Forbidden Planet’, by Bob Carlton who recently passed away earlier this year, is a Sci-fi musical inspired by ‘The Tempest’, with famous lines from other Shakespearean plays and lively rock and roll hits from the 50s, 60s and 70s.

The story begins as the sophisticated Captain Tempest, brilliantly played by Caleb Garry, commands his team on a routine survey flight, with a new science officer on board, Jade Gannon.

As a shower of meteorites hits the ship, the science officer flees, and the craft is pulled towards the Planet D’illyria – where mad scientist Doctor Prospero played by Thomas Chapman, has been cast adrift for 15 years with his teenage daughter Miranda played on the first night by the lovely Chloe Collins and on the second night by the beautiful Eleri Willson.  Here he works on developing the elusive formula with which he would change the world.

It’s on the forbidden planet that the story unfolds – with plenty of lively dancing, familiar songs such as ‘Great Balls of Fire’, ‘ All Shook up’ and ‘A Teenager in Love’ all smoothly choreographed.  The show had the audience engaged and interactive from the off and on both nights the audience’s response was enthusiastic and upbeat. This along with the comedy moments and impressive vocals during the musical numbers made for a thrilling watch.

The cast delivered their Shakespearean scripts with ease, with a well-pitched tone from Richard Bresnen as the Narrator, while Amy Jones playing Ariel the silver robot, skated her way effortlessly around the stage on roller boots.  There were fun and enthusiastic performances by Gabrielle Grant, Bosun and Navigational Officer, Todd Bates with entertainment on the guitar by Lewis Reynolds – Samuel as the lovelorn Cookie.

The set was a feast for the eyes along with the funky costumes worn by the dancing crew made up of Crew Leader Lauren Tidbury, and Crew, Kasie Fury, Poppy Evans, Wyatt Hughes, James Harmon and Alistair Acraman.

All in all, the cast worked their socks off to make sure the audience had a thoroughly enjoyable time. A great production from all involved. Well done Ovation Theatre Company.